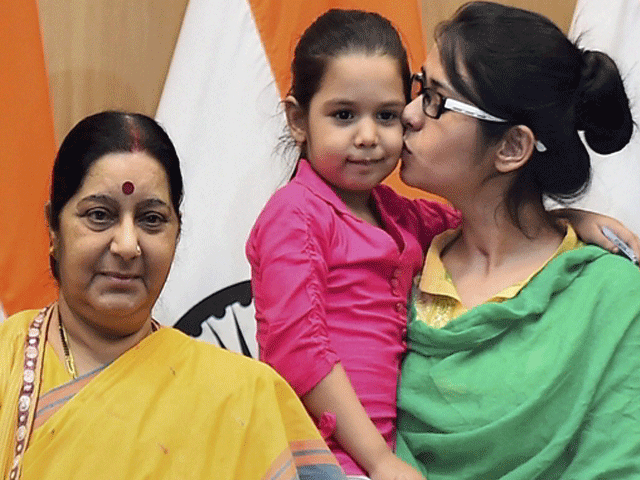 Indian External Affairs Minister, Sushma Swaraj, has thanked Pakistani diplomats and judiciary for the safe return of Indian national, Uzma, who had alleged she was duped into marrying a Pakistani man, according to The Hindu.

The case of Uzma, 20, took several turns when finally she was repatriated to New Delhi on Thursday following an Islamabad High Court (IHC) order.

Swaraj said India would like to thank Pakistan despite differences in the status of bilateral political relations.

“Today, I would like to express our appreciation of Pakistan irrespective of the current state of bilateral ties. If Uzma is here today, that is because the Ministry of Foreign Affairs of Pakistan has helped us a lot. Pakistan’s Home Ministry has also helped us a lot,” said Swaraj.

Also lauding Pakistan’s judicial support, Swaraj said, “Political relations are another thing but Justice [Mohsin Akhtar] Kayani gave the verdict on humanitarian grounds. Her husband argued that the case was about the prestige of Pakistan but (Justice Kayani) said, how is this case related to the prestige of India or Pakistan? Barrister Shah Nawaz Noon argued the case almost like a father.”

Swaraj welcomed Uzma as she returned to India via the Wagah border. “Uzma – Welcome home India’s daughter. I am sorry for all that you have gone through,” she tweeted.

Indian woman Uzma returned to India via Attari-Wagah border after Islamabad HC’s permission, had alleged she was forced to marry a Pakistani pic.twitter.com/fzqNs4Xrpg

During a press conference in India after her return, as India’s NDTV reported, Uzma said, “Pakistan is a death trap. Why women, not even men are safe there.”

The Indian national had alleged that her husband Tahir Ali – a resident of Buner region in Khyber Pakhtunkhwa K-P) – had assaulted her.

Uzma had claimed, “My Pakistani husband forced me to marry him on gunpoint and even harassed me.” She approached the IHC on May 12 to arrange her journey back to Delhi amid security and to issue duplicate travel documents which were allegedly stolen by Tahir.