Sushma Swaraj welcom­ed Uzma and empath­ised with her ordeal in Pakist­an
By News Desk
Published: May 25, 2017
Tweet Email 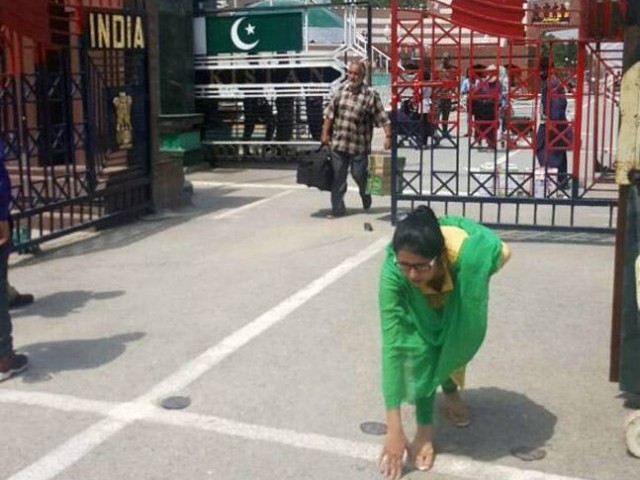 Uzma reaches back to India. PHOTO COURTESY: TIME OF INDIA

Indian national Uzma who alleged she was forced and duped into marrying a Pakistani man was repatriated to her country on Thursday following court orders.

Indian external affairs ministers Sushma Swaraj welcomed Uzma as she returned to India via the Wagah border. “Uzma – Welcome home India’s daughter. I am sorry for all that you have gone through,” Swaraj tweeted.

Uzma – Welcome home India's daughter. I am sorry for all that you have gone through.

The Islamabad High Court (IHC) on Wednesday allowed Uzma to return to her country days after she claimed she was duped and forced into marrying a Pakistani man. Soon after the hearing, Uzma left the court for the Indian High Commission where she stayed until she was sent back.

Rejoiced over the news of Uzma’s return to her homeland, her brother Wasim said, “Very happy to hear that Uzma is back, but don’t know when she will be back in Delhi, her flight is delayed,” reported Times of India. He even thanked the Indian government for assisting him in the safe return of her sister.

Uzma, 20, had travelled to Pakistan earlier this month. “My Pakistani husband forced me to marry him on gunpoint and even harassed me,” she said. Uzma had approached the Islamabad High Court on May 12 to arrange her journey back to Delhi amid security and to issue duplicate travel documents which were allegedly stolen by Tahir.