'Was I an animal', asks Kashmiri man who was tied to jeep by Indian forces

'Was I an animal', asks Kashmiri man who was tied to jeep by Indian forces 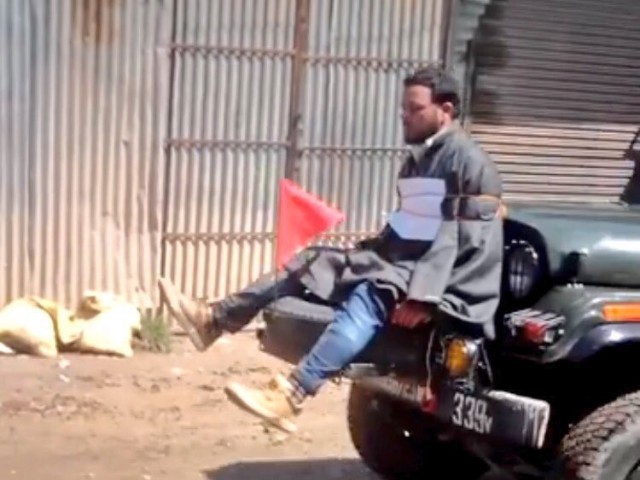 Farooq Dar, the Kashmiri man who was tied to a jeep by an Indian Army Major has put a question to the Indian authorities about using him as a human shield.

“I want to ask only one thing; was I an animal that I was tied and exhibited?” he asked.

When a video showing Dar being used as a human shield by Major Leetul Gogoi surfaced online in April this year, it caused much rage. It showed him tied in front of an army vehicle in what seems to be an apparent attempt to shield the Indian army from protesters. In the background, an army soldier can be heard saying, “Those who throw stones will meet the same fate.”

Major Gogoi has recently won a commendation from the Indian Army Chief. The army claimed that the award was given for his “sustained efforts” in fighting the insurgency, and had no links with the “jeep incident”.

Dar asked, “Which law in the country makes use of human shield legal?”

“If it was legal under any Indian law, what can I possibly say,” he said. “I cannot pick up a stick and go and fight with those honouring the officer,” the Kashmiri man told HT.

Mirwaiz Umar Farooq Chairman All Parties Hurriyat Conference (APHC) said that the honour has not “come as a shock to Kashmiris”.

“This is how the army has been conducting itself in Kashmir for so long,” he stressed. It is a “clear message as to how Indian authorities are rewarding human rights violators in the valley and all the inquiries are a farce. It also shows how they view Kashmiri sentiment which was so hurt by the incident.”

More than the physical trauma, Dar said, it was his mental health which seems to have taken a hit by the incident.

“My ankles and muscles still ache. What is worse, however, is that I am unable to leave my village. Even if I step out of the home, I take someone along,” he explained.