An indian soldie­r in the backgr­ound warned people of their fate if they threw stones at them
By News Desk
Published: April 14, 2017
Tweet Email 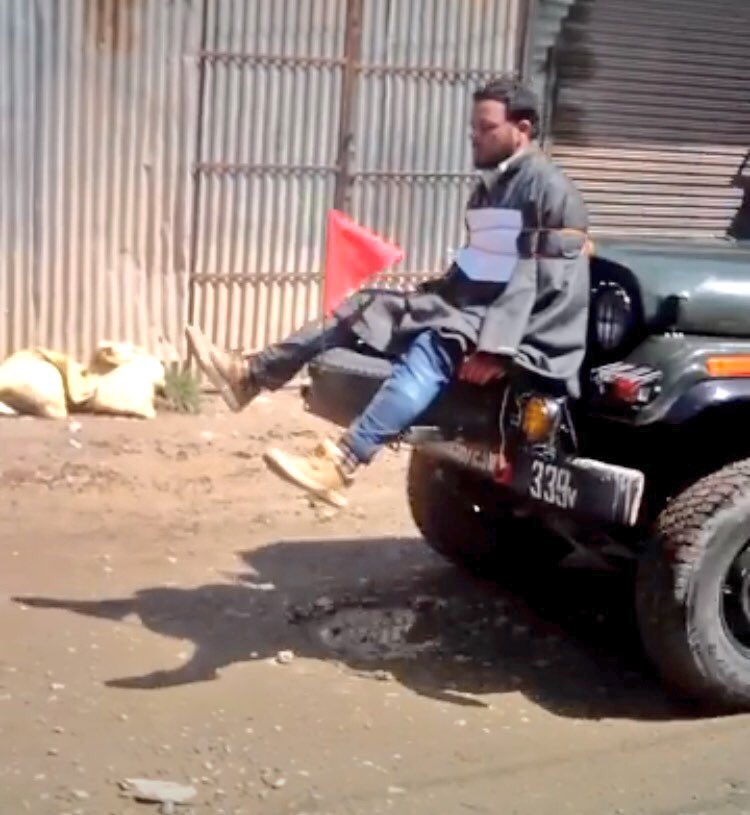 A video showing a Kashmiri youth being used as a human shield by the Indian army in held-Kashmir, surfaced online on Thursday, causing much rage.

The clip shows a young man tied in front of an army vehicle in what seems to be an apparent attempt to shield the Indian army from protesters. In the background, an army soldier can be heard saying: “Those who throw stones will meet the same fate.”

Taking notice of the incident, former Chief Minister of Indian-held Kashmir, Omar Abdullah expressed his shock on Twitter. “This young man was TIED to the front of an army jeep to make sure no stones were thrown at the jeep? This is just so shocking!!!!,” he said while sharing the video:

Here's the video as well. A warning can be heard saying stone pelters will meet this fate. This requires an urgent inquiry & follow up NOW!! pic.twitter.com/qj1rnCVazn

Let's see channels going ballistic &having discussions with outraged panelists now. Probably not since "Kashmir is ours" hell with Kashmiris

The video has since gone viral, attracting criticism from all over:

Army tied a stone petlers in front of the Jeep in Kashmir.waa what an idea sir ji
.what about tieing the separatist leaders and throw stones pic.twitter.com/7eCpT8ksvd

Indian army's abuse and torture in #Kashmir exposed again. Tied a civilian to army vehicle as a human shield. pic.twitter.com/bqJMBpC00M

A boy tied in front of Army vehicle paraded. How brave of Indian Army. #Kashmir

According to Indian Express, the incident took place in a village at Beerwah. Speaking to the newspaper, Indian army spokesperson said the video was being verified.

Earlier this week, Indian forces killed at least four Kashmiri youth during a military operation in the Keran area of Kupwara district. Curfew-like curbs were also imposed on the movement of people across several parts of the Himalayan region to ensure the Indian by-polls were conducted successfully.