As many as 58 stalls set up by 15 univer­sities from all across the countr­y
By YUSRA SALIM / Photo: Ayesha Mir
Published: May 21, 2017
Tweet Email 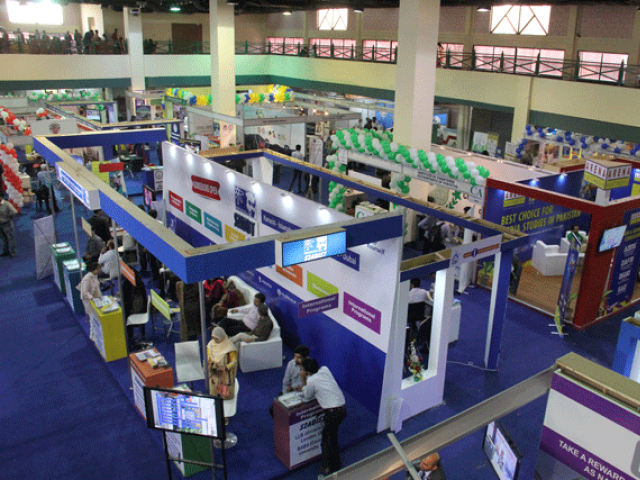 KARACHI: Over 15,000 people showed up on the first day of Express Education and Career Expo 2017 at Expo Centre on Saturday.

As many as 58 stalls were set up by 15 universities from all across the country. Many consultancy firms have also set up their stalls at the expo to assist students.

Renowned scientist Dr Attaur Rahman inaugurated the two-day-long education expo, which was organised by the Express media group to provide numerous options to students under one roof. He inaugurated the expo, visited the stalls and talked to the students present on the occasion.

Dr Rahman said that there are many international universities that are investing in Pakistan and setting up their campuses in the country.

Over 15,000 people showed up on the first day of Express Education and Career Expo 2017. PHOTO: AYESHA MIR

Italian Consul-General Dr Gianluca Rubagotti also graced the event. He visited the stalls and appreciated the efforts of the Express media group for arranging the education expo, which is an important platform for students who are looking for higher education opportunities. “It is like everything is under one roof to help the students,” he said. “Students do not have to go from university to university to get details for admission and further studies courses.”

The consul-general said there are three universities that are teaching the Italian language – Karachi University, Greenwich University and Institute of Business Management.

Sidra Jabeen, who visited the expo along with her family, was looking for medical universities as she recently finished her intermediate examinations. “So far, I have gotten a lot of information from different stalls, which I would not have if had visited the institutes,” she said while talking to The Express Tribune.

Books were also on display at the expo. PHOTO: AYESHA MIR

The expo was divided into two sections – Hall II had all the stalls while in Hall III, activities were happening in which students from different institutions were involved. Activities in Hall III included dance, drama, selfie competition, debate and painting. Artists from Arena multimedia were participating in the live painting competition.

A student participates in the painting competition in Hall III. PHOTO: AYESHA MIR