From job opport­unitie­s to entert­ainmen­t, there was someth­ing for everyo­ne at the event
By SHEHARYAR ALI
Published: February 25, 2017
Tweet Email 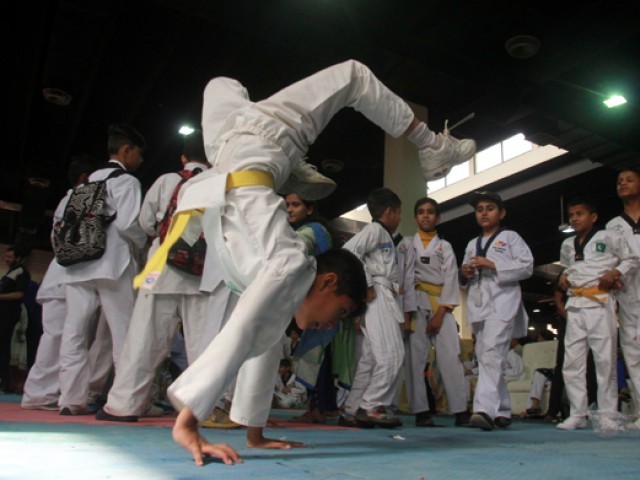 KARACHI  : To create a stronger and more effective platform for the largely marginalised differently-abled community in Pakistan, the Karachi Vocational Training Centre and government’s special education department organised the Abilities Expo, 2017.
The expo, which was held at Expo Centre on Saturday, presented a festival-like atmosphere where differently-abled individuals were able to enjoy themselves at an event organised especially for them.
The expo was inaugurated by Chief Minister Murad Ali Shah, who said we must provide our physically and mentally challenged brothers and sisters opportunities so that they can also live their lives like average people.

Karachi to play host to first exhibition for differently-abled persons

Talking to The Express Tribune, the secretary of the special education department, Zulfikar Shalwani, said that expos such as these are held around the world, which is why they decided to organise this event here. He added the vision behind the event was to create opportunities for differently-abled persons by providing them with employment opportunities, skill development and vocational training.
The exhibition was packed with visitors and every stall and booth was filled.

The stalls
There were various stalls displaying toys, handicrafts, paintings and artwork created by physically and mentally differently-abled individuals at the event, as well as stalls providing the participants opportunities they would not receive elsewhere.
The booth set up by the Network of Organisations Working with People with Disabilities Pakistan (NOWPDP) attracted most of the visitors as they had taken on the task of hosting a job fair at the exhibition.

The external engagement manager of NOWPDP, Amin Andnani, said they developed a portal for the differently-abled where, according to their skills, they are matched with employment opportunities.
He added they remain in contact with private corporate companies and their response was very positive when it came to providing jobs to differently-abled persons.
Wonder Tree set up a stall where differently-abled individuals who are game lovers had gathered. Ahmed Bukhari, co-founder of Wonder Tree, said they have developed six games so far for these individuals. He mentioned that the idea came when they observed that one of their co-founder’s brothers was very good at playing X-Box games. They then decided to develop games for differently-abled persons, which not only provide them with entertainment but also with mental therapy.
Ahmed Shahab, a BSC student, cannot speak or hear but was able to convey his joy for being at the event through sign language. After returning from the job fair stall, he signalled a ‘thumbs up’, which meant that his job was almost done.

The organisers had also arranged musical and theatre programmes in which differently-abled children also took part.
The mother of Muhammad Farooq, a child with Down’s syndrome, said the event was more like a festival for the children than an expo. She said that that as a society we are far away from recognising and providing facilities to those who are physically or mentally disabled.