Karach­i will soon be called China Town under CPEC
By Shehzad Ghias
Published: May 18, 2017
Tweet Email 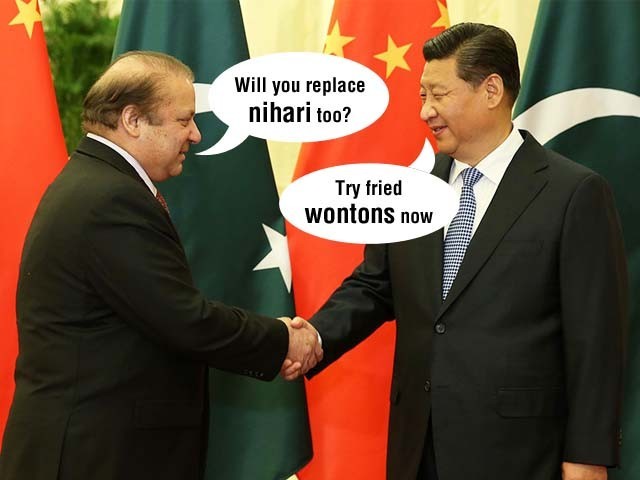 Prime Minister Nawaz Sharif was recently in China to participate in the ‘One Belt, One Road’ summit, which is ironic since his name and the word belt have never been used in the same sentence before. Many people have to tie two belts together and a nara with izarband each time when choosing to wear a suit. The struggle is real, people, especially for our respected premier.

At great risk to my personal well-being, I somehow managed to stick my hand in the pocket of PM Nawaz’s suit shalwar and pull out the longest term plan for the China-Pak Economic Dumbledore, I mean Corridor. I uttered Dumbledore first because the way China has convinced us that the China-Pakistan Economic Corridor is a game-changer for Pakistan has to be magic. I would not be surprised if Chinese Prime Minister Li Keqiang tried giving Nawaz some ‘love potion’ the last time they met. There is a reason why their love is higher than the mountains and deeper than the seas, you know.

And guess what… the CPEC master plan revelations are truly shocking.

The Shan (soon to be called Shan-Ghai masalay) advertisement was just the start. The Chinese are planning to replace every kind of Biryani (mind you) in Pakistan with Chicken Manchurian. In many ways, the master plan is exactly like the advertisement; to lure neighbours into friendship with food. When the loving dadi in the advertisement tells the Chinese woman, “Isko apna hee ghar samjho”, she just smiles knowing that that was her plan all along.

You know Nawaz Sharif is involved when all it took to win people over was a plate of biryani – this is basically how he took office.

The CPEC master plan has a simple proposal for agriculture which can be summarised in just four words: We grow, they eat. Everyone who once laughed at the Chinese people for eating dogs will not be laughing anymore when they will end up eating all our crops.

The Chinese idea to increase agricultural exports to one of the most water-stressed countries in the world is genius! If all the water goes to the crops then none of the water will be left for drinking, which will cure all our population-related problems.

If the, soon to be implemented, one child per house Chinese policy does not seem to work in Pakistan then the scarcity of water will do the trick – and please. Don’t worry about how so many Chinese will fit in Pakistan because dil mai jaga honi chaiye, yaar.

According to the plan, Karachi’s new name will be “China Town” and, in a reversal of fortune, Karachi will be the name of a restaurant in China Town. Lahore is to be called Lo Ho Ping, Gwadar is to be named Lo A Gaye Hum and Islamabad’s new name is Char Jao Ab Ling.

It is unclear what punishment the Chinese will give to those who shut down Chinese parlours in Islamabad. All the popular religious parties, who claimed communist parties could never win elections in Pakistan, are reportedly re-evaluating their beliefs.

The Chinese are also producing a sequel to the movie ‘Chalay thay saath’ now called ‘Chalay thay saath billion’. The movie revolves around sending the entire Chinese population into Pakistan and ends with the region being surrounded by the Great Wall of China. It is obviously fiction… for now.

The full surveillance system will ensure that Pakistanis do not do to the Great Wall of China what they do to every wall in the country. Huge sign boards saying saying ‘Great Wall of China par peshab karna mana hay’. In Mandarin. But that will not be a problem because soon it will be mandatory for all Pakistanis to learn Mandarin. The process has already started at primary schools.

The CPEC master’s master plan also reveals the internet in Pakistan will be replaced by cat videos. It envisions a deep and broad based penetration – which is what most Pakistani teenage boys also envision when they use the internet. No Facebook, Twitter or Instagram; the internet will just be billions and billions of cat videos.

The aim is replicate the calm that the people of Pakistan had when PTV was the only channel available. Just like Ayub Khan had videos of tractors everywhere. Even when the country was on the verge of a disaster, the nation remained calm because they watched videos teaching them how to drive tractors. What was the country’s domestic policy, you ask? People don’t know because when Pakistanis are driving tractors they are not thinking about the domestic policy.

In the same way, instead of worrying about their civil liberties and fundamental rights people will watch cat videos. The cuteness of the videos will distract them enough to forget about everything else.

It really is an ingenious plan — but they can’t fool me. I know exactly what the Chinese are up to…oh wait look at that cat video, it makes me completely forget about the East China Company.