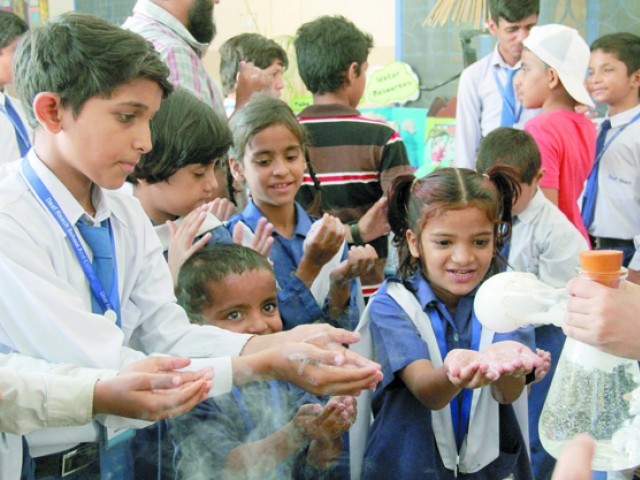 Through various sessions, the children learnt mathematics with the help of cards, boxes, abacus and simple calculations. PHOTO: AYESHA MIR/EXPRESS

KARACHI: More than 150 students with hearing impairment got to take part in activities and learn science through experiments at Deaf Reach School and Training Centre in Gulistan-e-Jauhar on Tuesday.

The activities were arranged for the students as part of an interactive session organised at a mathematics, arts and science festival. The event was organised by Alif Ailaan, in collaboration with the Pakistan Alliance for Mathematics and Science, Science Fuse, Robotec and ‘I Am Karachi’. 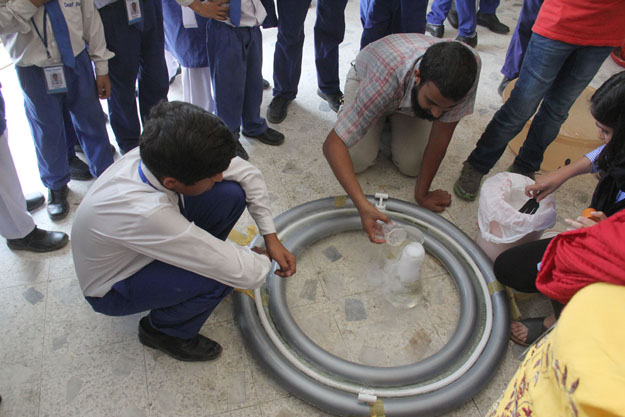 The activities were arranged for the students as part of an interactive session organised at a mathematics, arts and science festival. PHOTO: AYESHA MIR/EXPRESS

According to Sikander Bizenjo, Alif Ailaan’s regional campaign organiser for Karachi, after working with the idea in different public sector schools, their next target was to approach differently-abled children and help them learn about subjects such as science and mathematics through fun experiments.

“We approached the special education secretary but he was not supportive to allow our team to conduct the festival in any government-run centre,” he said while speaking about why the festival was organised in a private centre.

The festival was divided into three sessions. Mathematics sessions were conducted by Robotec, science experiments were led by Science Fuse while art sessions were managed by the ‘I Am Karachi’ team. 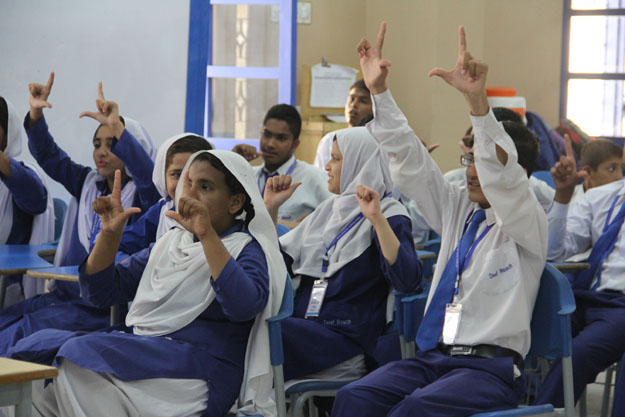 The event was organised by Alif Ailaan, in collaboration with the Pakistan Alliance for Mathematics and Science, Science Fuse, Robotec and ‘I Am Karachi’. PHOTO: AYESHA MIR/EXPRESS

The founder of Science Fuse, Lalarukh, who was interacting with the students through the help of their teacher, explained to the children how they can learn physics and chemistry through soap bubbles. “We prepared two different modules for the children to explain them easily,” Lalarukh said. In the first module, she said, they explained laws such as Newton’s gravity and force laws, while in the other they worked with soap bubbles that are fascinating for everyone, including elders. She explained how they have prepared different experiments for the hearing-impaired students to understand easily.

In a first: Licences to be issued to hearing impaired

“Science is all about engagement with the experiment,” she said, adding that the students here just have a hearing problem while all of their other senses work phenomenally. “The children are learning and understanding the theories and laws by touching, smelling and watching,” Lalarukh added.

Four students from Lyari’s DCTO Kiran School were also present at the festival as volunteers to help the children understand the experiments through sign language. “These volunteers have learnt sign language to help hearing-impaired children,” said Areeb Minhaj, who was teaching children sign language.

“I started learning sign language when I was three-and-half years old,” said Amir Hamza, who learnt it because his younger brother is hearing impaired. Hamza and his best friend, cousin and youngest brother work as volunteers to help hearing-impaired students communicate with others.

Through various sessions, the differently-abled children learnt mathematics with the help of cards, boxes, abacus and simple calculations. “Children get bored with their daily routine but such festivals are refreshing for them, through which they learn something new,” said one of the teachers, adding that they teach the children using visuals, videos and interactive techniques.

The school has 186 students registered from playgroup till intermediate level. There are 30 teachers who are performing their duties in the school, of which 60% teachers are also hearing-impaired.