Putin says Russia not involved in cyberattack, blames US

Hana Khatib is an attorney from the northern town of Tamra

Israeli Muslim Hana Khatib, the first woman in Israel to be appointed by an Israeli justice committee to become a religious judge, or qadi, in the courts ruling on personal law for Muslims poses for a photo on May 15, 2017, during her swearing in ceremony at the President s Residence in Jerusalem. PHOTO: AFP
JERUSALEM: Israel on Monday swore in its first female judge to its Muslim religious court system, the first woman to preside in any religious court in the Jewish state.

Hana Khatib, an attorney from the northern town of Tamra, became a qadi, judge in arabic, in the Muslim court system that deals with personal law at a ceremony in the presidential residence in Jerusalem.

"This appointment and my success in achieving it is a success for the legal system and for women," she said after the ceremony.

"We see that the Sharia system is kind to women and with this achievement we give them their rights."

Israeli President Reuven Rivlin, who hosted the swearing-in ceremony, said he hoped the appointment would be a first step and that other courts, including Jewish ones, would follow suit.

"This is testament to the positive changes in the status of women," he said. "I allow myself to express the hope that the appointment of the first female religious judge will be the first of many, not just in the Muslim community."

Justice Ministry Ayelet Shaked was also in attendance, as were a number of Arab Israeli parliamentarians and senior figures. 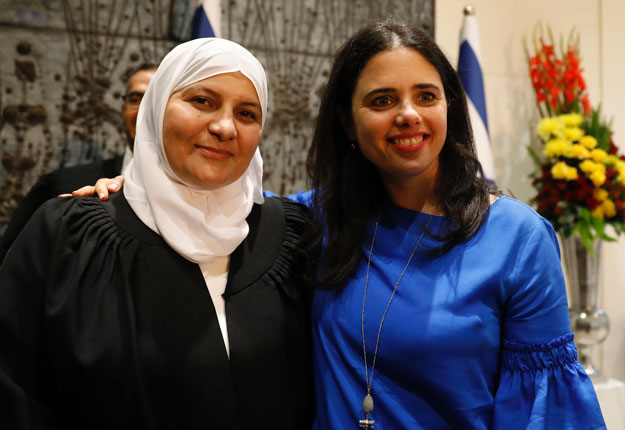 President of the Islamic Sharia Court Sheikh Abdel al-Hakim Samara also hailed the appointment, saying it would be the "first in a series" of women serving in religious courts.

In Israel, family law - divorce, marriage, endowments - falls under the jurisdiction of religious courts, and separate systems exist for the country's different creeds.

Her appointment brings to 18 the number of judges on the nine Islamic courts.

There are not many women qadis around the world. Two women serve as sharia judges in the neighbouring Palestinian Authority.

Making up around 18 per cent of Israel's population, Arab Israelis are descended from Palestinians who remained on their land after Israel was established.

No matter what a woman wears, the person who commits rape is responsible: Imran Khan

Govt to form bodies to evaluate threat to VIPs