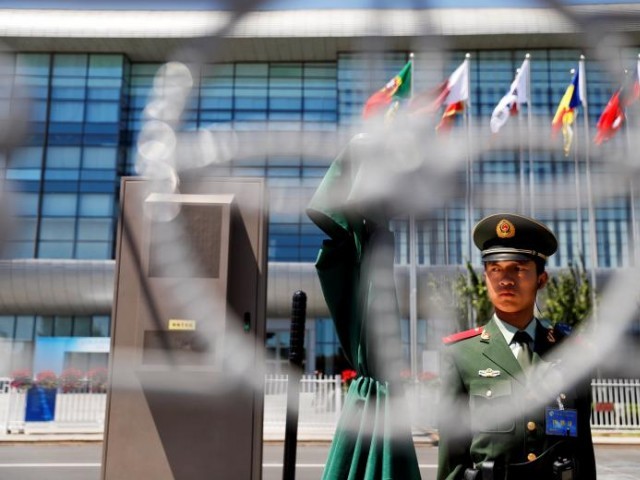 A paramilitary policemen secures the venue of the Belt and Road Forum in Beijing, China, May 14, 2017. PHOTO: REUTERS

NEW DELHI: India has not sent an official delegation to attend the “Belt and Road Forum” in Beijing and instead criticized China’s global initiative, warning of an “unsustainable debt burden” for countries involved.

Chinese President Xi Jinping is hosting dozens of world leaders and senior officials on Sunday for the country’s biggest diplomatic showcase of the year, touting his vision of a new “Silk Road” that opens trade routes across the globe.

Government officials from New Delhi did not travel, Indian officials said, although scholars from Indian think-tanks have flown to Beijing to attend some of the meetings at the forum.

Indian foreign ministry spokesperson Gopal Baglay, asked whether New Delhi was participating in the summit, said India could not accept a project that compromised its sovereignty.

India is incensed that one of the key Belt and Road projects passes through Pakistan.

“No country can accept a project that ignores its core concerns on sovereignty and territorial integrity,” Baglay said.

He also warned of the danger of debt. One of the criticisms of the Silk Road plan is that host countries may struggle to pay back loans for huge infrastructure projects being carried out and funded by Chinese companies and banks.

New Delhi’s criticism of the Belt and Road initiative came as Xi pledged $124 billion to the plan, and called for the abandonment of old models based on rivalry and diplomatic power games.

Leaders from 29 countries and ministerial delegates from many more are attending the forum in Beijing, including Pakistan, Sri Lanka and Nepal.

Baglay said India supported greater connectivity across the region and listed the initiatives it was involved in, including highway projects and the North-South corridor in Central Asia, but he said these had to be developed in a transparent manner.

“We are of firm belief that connectivity initiatives must be based on universally recognized international norms, good governance, rule of law, openness, transparency and equality,” he said in a statement.

As well as the corridor through Pakistan, India is worried more broadly about China’s economic and diplomatic expansion through Asia, and in particular across countries and waterways that it considers to be its sphere of influence.