PTI chief says the milita­ry being malign­ed on the behest of India
By Our. Correspondents
Published: May 12, 2017
Tweet Email 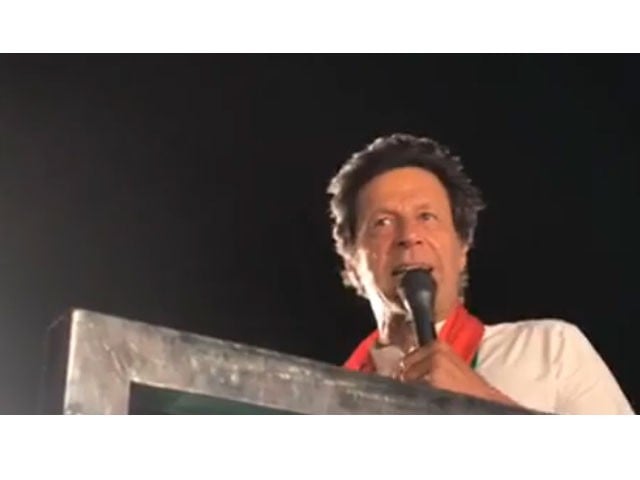 SARGODHA: Calling Dawn Leaks issue a conspiracy against the armed forces, the Pakistan Tehreek-e-Insaf (PTI) chief Imran Khan has claimed that the controversy was aimed at weakening  Pakistan and its army and to draw the attention away from the humanitarian crisis in disputed valley of Kashmir.

“Enemies want to weaken the country through [Dawn] Leaks. They want to weaken the army. This is an Indian conspiracy and its friends are also involved,” Imran said, while addressing a big public gathering in Punjab’s Sargodha district.

“The Pakistan Army is being maligned in a bid to divert attention from Kashmir’s freedom movement. They try to give an impression that ‘we [the government] want [to have friendly ties with in India] but the army does not and have started a campaign [in this regard],” he added.

He said that now ‘they’ were saying that the army had retreated in the tiff over taking action against those responsible for planting the controversial story against national interest.

“What could the army do? Would it impose the martial law?” Imran asked as he demanded that the report of the inquiry committee into Dawn Leaks controversy be made public.

Dawn Leaks: Nation needs to know what has been ‘settled’, says Imran Khan

“It is not a decision of the army. It [Dawn Leaks] is a nation’s issue,” he added.

Talking with reference to the ongoing investigations by a joint investigation team (JIT) into the alleged corruption of Sharif family, Imran Khan said he would continue his struggle against Prime Minister Nawaz Sharif irrespective of  the JIT’s findings.

“As long as I am alive, I shall keep on fighting and will not rest before defeating him [PM]. Nawaz Sharif is the biggest thief, dacoit, Mir Jafar and Mir Sadiq and fighting against him is [like a] worship,” he said.

“Election-fixer [a derogatory reference to Najam Sethi] was placed in PCB [Pakistan Cricket Board] while bootblacks have been appointed at important positions,” he added.

Imran claimed that billions of rupees to Independent power producers (IPPs) which in return give money to the ruling Pakistan Muslim League-Nawaz [PML-N] for fighting elections.

“In2013, Rs480 billion were given to IPPs and now Senate Finance Committee report says that Rs62 billion were misappropriated as this money [Rs63b] was given to those IPPs which give them funds for elections,” he said.

“I shall take this case to the National Accountability Bureau [NAB]. We will free the country from corrupt elements,” he added.  The PTI chief also announced to pursue the Asghar Khan case, adding that the nation now pinned hope on the Supreme Court.

Imran said Nawaz demanded resignation from former prime minister Yousaf Raza Gilani and now he should resign on his own.

Lambasting the ruling party for filing a case against the PTI for receiving funds from abroad, he said those who sent billions of rupees foreign exchange to the country to fund to the party were tagged as unpatriotic. “Such people should be ashamed of themselves.”

Speaking on the occasion, the PTI Vice Chairman Shah Mehmood Qureshi said all the institutions had ganged up against the PTI but the party was not ready to compromise. He demanded that the Dawn Leaks inquiry commission report be presented in parliament.

“Now there are only two dominant slogans: one is calling for removal of the PM; the other is heralding Imran Khan,” Qureshi said to the audience cheer.