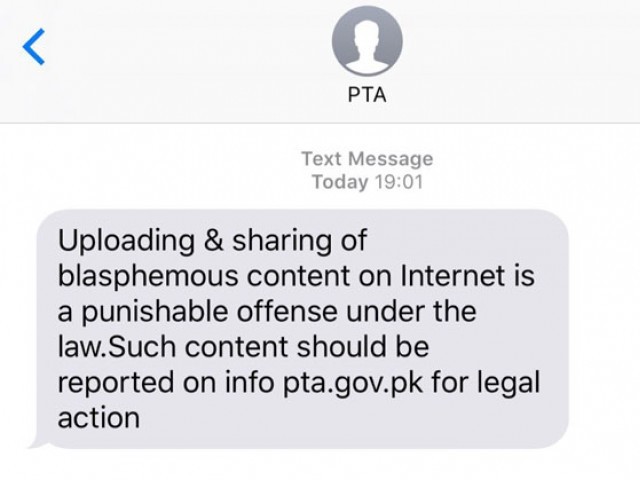 Screen grab of the message sent by PTA to mobile subscribers

ISLAMABAD: Millions of Pakistanis have been receiving text messages from the government warning them against sharing “blasphemous” content online.

“Uploading & sharing of blasphemous content on Internet is a punishable offense under the law. Such content should be reported on info@pta.gov.pk for legal action,” read the SMS sent by the Pakistan Telecommunication Authority (PTA) to all mobile phone subscribers.

A similar note was posted on the agency’s website in Urdu. A PTA spokesperson said the agency was acting on a court order.

Blasphemy is a sensitive issue in the country, with allegations leading to dozens of mob attacks or murders.

Last week a 10-year old boy was killed and five others were wounded when a mob attacked a police station in an attempt to lynch a Hindu man charged with blasphemy for allegedly posting an incendiary image on social media.