Pakistan's repayments on CPEC to peak at $5b in 2022: chief economist

Pakistan's repayments on CPEC to peak at $5b in 2022: chief economist 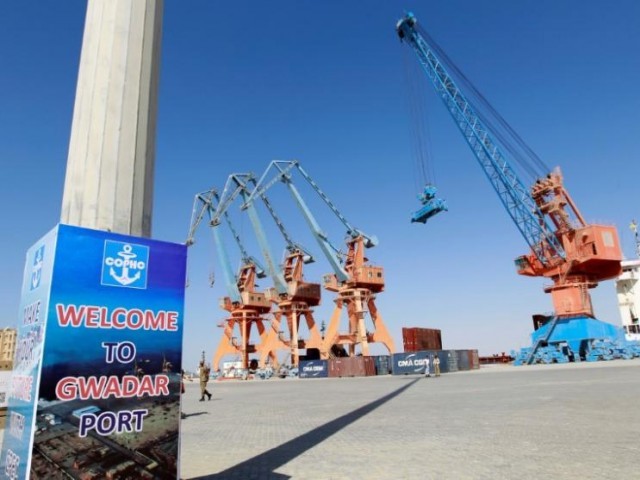 A general view of the port before the inauguration of the China Pakistan Economic Corridor port in Gwadar, Pakistan November 13, 2016. PHOTO: REUTERS

ISLAMABAD: Pakistan’s debt and other repayments on China’s “Belt and Road” initiative will peak at around $5 billion in 2022, but will be more than offset by transit fees charged on the new transport corridor, says the Pakistan government’s chief economist.

China has pledged to invest up to $57 billion in Pakistan’s rail, road and energy infrastructure through its vast modern-day “Silk Road” network of trade routes linking Asia with Europe and Africa.

Officials expect a huge uptick in trade between the two nations once Pakistan’s Arabian Sea port of Gwadar is functional and work on motorways is finished allowing goods to cross the Himalayas to and from China’s western Xinjiang province.

China says Silk Road plan is not tied to presidency

Nadeem Javaid, who advises Prime Minister Nawaz Sharif’s government and works closely on the CPEC programme, told Reuters that such fears are misplaced as Islamabad would earn vast fees from charging vehicles moving goods from and to China.

Javaid said the Gwadar-Xinjiang corridor should be operational from June next year, and Pakistan expects up to 4% of global trade to pass through it by 2020.

“The kind of toll tax, rental fees that the Pakistani system will gain is roughly $6-$8 billion a year,” Javaid, chief economist at the planning ministry, said in an interview. “By 2020, I expect we will get this much momentum.”

He said China has huge incentives to transport oil and other goods bound for its western regions through Pakistan as the Gwadar-Xinjiang corridor shaves some 9,500 miles (15,000 km) off other traditional routes.

Is CPEC also a game changer for Balochistan?

It doesn’t take long to imagine the savings on the many millions of litres of fuel, he said.

Risk to balance of payments?

Investors are watching Pakistan’s ballooning current account deficit, which widened by more than 160% to $6.1 billion in the nine months to March, largely due to imports of machinery for big CPEC projects.

Javaid said debt repayments and profit repatriation from CPEC projects will begin in 2019, totalling about $1.5-$1.9 billion, and rising to $3-$3.5 billion by the following year.

“It would be low in the beginning, and in 2022 it will peak at around $5 billion – not more than that,” said the chief economist, adding that the government does not think it likely that Pakistan will face a balance of payments crisis.

The last such crisis in 2013 saw Islamabad turn to the International Monetary Fund for help.

Javaid said the CPEC should boost economic growth, which he expects to hit 5.2% in 2016-17. Exports should also pick up once CPEC power projects totalling 7,000 megawatts come online and reduce the often crippling energy shortages.

Deepening political and military ties between Pakistan and China have helped closer financial integration, too, with Chinese companies starting to buy Pakistani firms and land.

Javaid said the two countries have also discussed using a currency swap agreement between their central banks to create a mechanism to avoid any third currency in international transactions.

“If some mechanism is going to be finalised on that, it will work as a buffer or a cushion that’s going to basically avoid or prevent any kind of default that could happen in unforeseen circumstances.”

But he added, “It’s only a contingency arrangement in case something bad happens.”