I was never desperate to work in Bollywood: Saba Qamar

I was never desperate to work in Bollywood: Saba Qamar 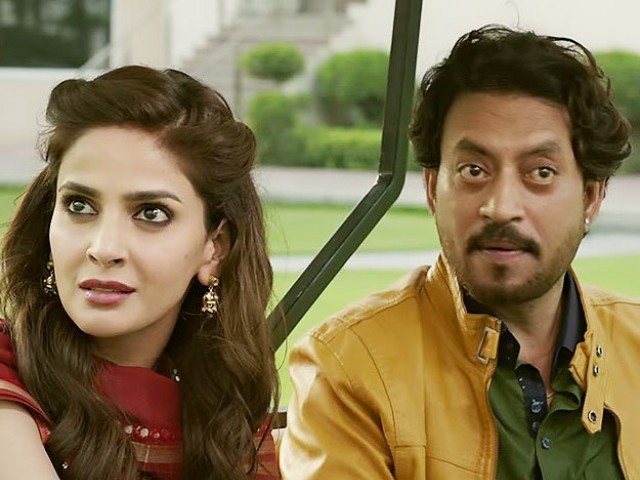 LAHORE  : It’s a man’s world and show business is a man’s meal, Carrie Fisher once wrote. While this may hold true for a bevy of Pakistani artists as well, it’s certainly not the case with actor Saba Qamar. The entertainment industry is the actor’s galaxy and she is on her way to gaining stardom across the border.

Thrilled about the upcoming release of her first Bollywood venture Hindi medium – where she plays the female lead opposite Irrfan Khan – Saba told The Express Tribune, “I was never desperate to work in Bollywood though I aspired to do a movie across the border but only if I was offered a strong character and a main lead. My plays are widely watched in India and are equally popular. Irrfan had also watched my serial on YouTube and he recommended me to the director.”

She added, “At first when I received a call from Irrfan’s manager, I thought it was a prank call but later the casting director called and offered me the role. The director wanted someone to portray a role like Kareena Kapoor Khan did in Jab We Met.” The Lahore Se Aagay star revealed she was more excited to sign the project because it is being directed by Saqib Chaudhary – who has belted out popular films including as Pyaar Kay Side Affects and Shaadi Ke Side Effects. Also, the film is being produced by the makers of Cocktail and Love Aaj Kal. “So, I had faith in the entire team that they will make something good.”

Saba shot Hindi Medium in New Delhi and Georgia. Speaking about the experience, she added, “I had the best time shooting for the movie. It was an amazing experience. Everybody from the hero to the director to spot boy was so humble and gave me the utmost respect. Even the designers would address me as ‘Ma’am’.”

Many people would think working in India is not easy for Pakistani artists anymore, especially during a time of strained political relations between the two countries. However, Saba feels otherwise. “I was given royal treatment. I was protected and pampered so much that I was put in the best five stars hotels. My mini bar would never end. They would ask me my favourite dishes and drinks, and anything I needed was arranged for me,” she stated.

“I never felt strange or alien in India. I am not scared of death. If my fate is to die in India, I will die there.  In fact Irrfan would always say ‘Saba tou cheeti hay, kissi say nahi darti’. I really hope the issues between the two countries are resolved because I would love to work in Bollywood for all the respect and honour that I have received there. Mein do do hath jaon gee phir say Bollywood, jo nakhray meray wahan uthaye gaye aur mujhey saatwein aasman pay bethaya,” she said.

Talking about her chemistry with Irrfan, Saba shared, “He is a superstar. I was so nervous on my first day of shoot but after one hour all my nervousness went away because Irrfan made me so comfortable. He and I shared a very strong on screen chemistry and we would hardly do more than two takes.  I am by nature very rebellious and I said to myself I will either do or die here. I had to prove myself. I often would ask Irrfan about my shots and he would say, ‘Why are you asking me, you know better, tum tou mujh say bhi aagay nikal rahi ho’ and I would say, ‘App meri kit laga rahein hain’.”

Saba recently boycotted Lux Style Awards because she felt the event did not deserve her attendance. “Ever since I have had a Bollywood stamp, all the top brands are chasing me for endorsements. Where were all the brands before I went to India. No one has ever approached me for the last thirteen years that I have been working.  But I have gotten immense support from my colleagues such as Ahsan Khan, Mahira Khan, Ayesha Omar, Jami and Sarmad Khoosat. They even gave me a shout out on Twitter for my film. Even Hindustan Times and Pinkvilla have compared me to Mahira Khan and given a verdict that my performance is far better than hers in Raees.”

Talking about marriage plans, Saba added, “I have not found anyone yet and I cannot get married just for the sake of marriage, it’s boring. I have told my mother, I rather be married for one year happily than be married unhappily for thirty years.” Saba is currently shooting a biopic in which she will be seen playing a role of late social media sensation Qandeel Baloch.