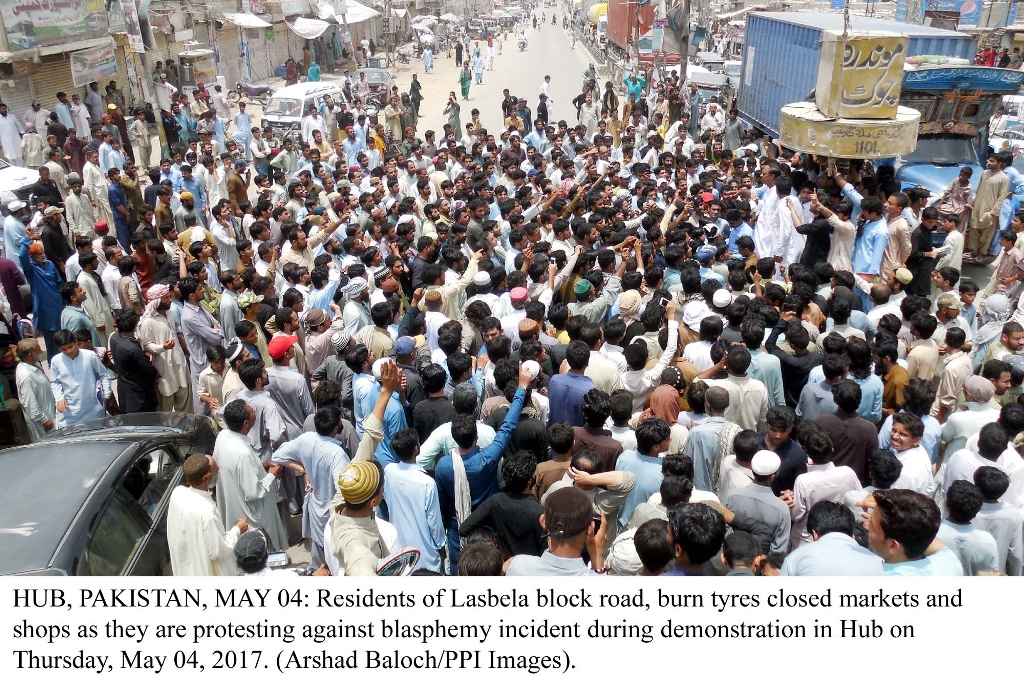 Residents of Lasbela protest against blasphemy incident in Hub on May 4, 2017. PHOTO: PPI

QUETTA/KARACHI: The Hub city of Lasbela district in Balochistan on Thursday witnessed violent protests followed by a shutter-down strike after an enraged mob besieged a police station to seek custody of a blasphemy suspect, who has already been shifted to jail.

The 35-year-old Hindu man was arrested on Wednesday by Hub city police after locals complained that he had allegedly sent blasphemous content via WhatsApp.   “The man was arrested after local people accused him of blasphemy,” SSP Lasbela Zia Mandokhel said.

He said the police lodged a case against the man on the complaint of various community members under Sections 295-A and 295-C of the Pakistan Penal Code while a cell phone, from which the suspect had allegedly shared blasphemous content, was also seized.

He said a local court later sent the accused to Gaddani jail for interrogation.

“At around 11 am on Thursday, a mob started gathering around Hub City police station and demanded custody of the accused,” he said.

Mandokhel said police and some Frontier Corps (FC) officials tried to persuade the mob that the accused had been shifted to the Gaddani jail on the orders of the court but they did not believe.

“We took four members of the mob inside the police station but even then they kept insisting on handing over of the accused to them.

“The enraged mob later started hurling stones at law enforcers who had to use tear gas and aerial firing to disperse the mob,” Mandokhel said, adding that the police also took 20 protesters into custody.

Nisar says no plan to book activists for blasphemy

He said as a result of the violence, SP Lasbela Jan Mohammad Khosa, Assistant Deputy Commissioner Tariq Mengal, some other officials and a rescue worker from Edhi were injured.

“A 13-year-old boy, Qudratullah Khan, son of Bismillah Khan, also sustained injury due to the protesters’ aerial firing. The child later succumbed to his injuries,” he added.

Mandokhel said the angry mob also blocked traffic – coming from or going to Karachi. This resulted in a huge gridlock. All the businesses were also shut down.

He said it was difficult to control the situation as the mob was being led by no one. “The situation is expected to remain under control as all religious parties have condemned such riots,” he added.

The next millennium belongs to Asia: Ishaq Dar