The struggling worker: Labour celebrates its day with song and dance

The struggling worker: Labour celebrates its day with song and dance 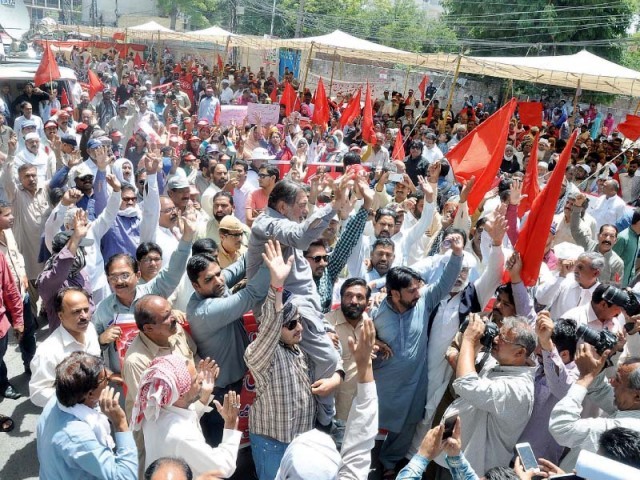 Workers mark Labour Day by taking out a rally in front of the Lahore Press Club. PHOTO: ABID NAWAZ/EXPRESS

LAHORE: A few chairs were neatly arranged at a dimly-lit venue in Sher-e-Bengal Society of Kala Shah Kaku area on Labour Day.

However, the gathered factory workers, taxi drivers, fruit vendors, restaurateurs and trade union activists of the colony has no interest in hearing “hollow” speeches. They were instead looking forward to a day of song, dance and theatre.

Among them were a few doctors, lawyers, engineers and journalists who were present to show solidarity with the working class. The main organiser of the event was the Red Workers’ Party (RWF), a countrywide trade union movement.

“May 1 is not just the odd day, but a call to continue the struggle for workers’ rights around the world,” commented Maqsood Hamdani, a WAPDA worker.

He said different political parties, NGOs and others had organised rallies across Lahore. However, he believes they did nothing more than shout “heartwarming slogans”.

“There are thousands of rallies and seminars which are organised by those who actually violate labourers’ rights,” said Adeel Zaidi, one of those in attendance.

“They have grown tired and most of them need to work even on May Day. By acting in plays, singing songs and giving small speeches, we just let them know that their struggle is also ours.” YDA Office bearer Dr Valeed Khan said workers cannot gain freedom without a socialist victory.

He said the government was now privatising all hospitals and health facilities, while factories were suffering the same fate. He added corrupt trade union leaderships had no concern over the matter.

Adam Pal, central leader of political party Lal Salaam, called on workers of the country to unite and start struggle for a socialist victory. He added failure to do so would result in ‘so-called’ leaders making a fool of the working class.

He said speeches, theatre plays, dramas, singing, rallies processions and seminars had long been organised, but nobody seemed able to liberate labourers.

Besides this venue, workers under the banners of different political parties also held rallies and organised seminars to marl the Chicago’s workers struggle. They assured workers of the world were united and would continue with their struggle till victory.