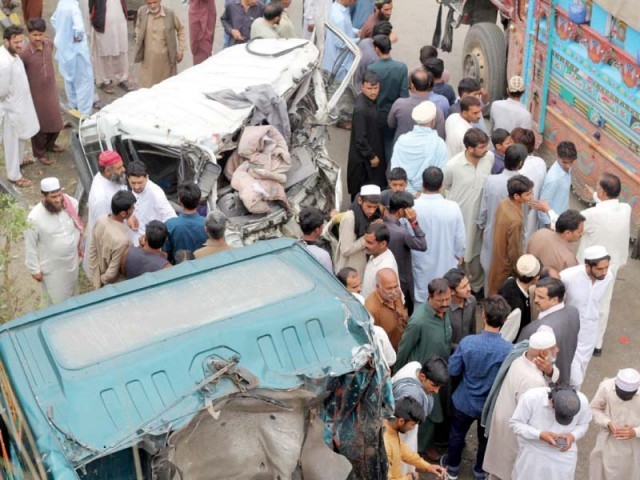 ISLAMABAD: A traffic pile up left six people dead and 18 injured at Havelian Mor on Karakoram Highway in Abbottabad on Saturday morning.

According to police and eyewitnesses, six vehicles rammed into each other on the Havelian Mor intersection apparently due to negligence of drivers. “A pile-up between a truck, a trailer-truck, two cars and  two Suzuki high-roof minivans took place near Havelian, after which police arrived at the spot and started rescue process,” a police official said.

Police blamed the accident on drivers of heavy vehicles. The truck drivers were racing their vehicles and one tried to overtake the other on Havelian intersection, an official said.

However, these road behemoths rammed  into each other. But as they skidded out of control due to momentum of the huge bodies, the trucks crushed two Suzuki high-roof minivans under them, he said quoting eyewitnesses.

A car nearing the roundabout rammed into the rear of a trailer as the driver tried in vain to avoid the pile up. Another car coming from the opposite side skidded into the melee going head on into the mass of crumpled metal, he said.

Five passengers died on the spot while another died during treatment at the hospital. At AMC doctors said that among the 18 injured, 12 were in critical condition.

The crash had caused severe traffic jam on the Karakoram Highway, the main road-link between Rawalpindi and Gilgit.