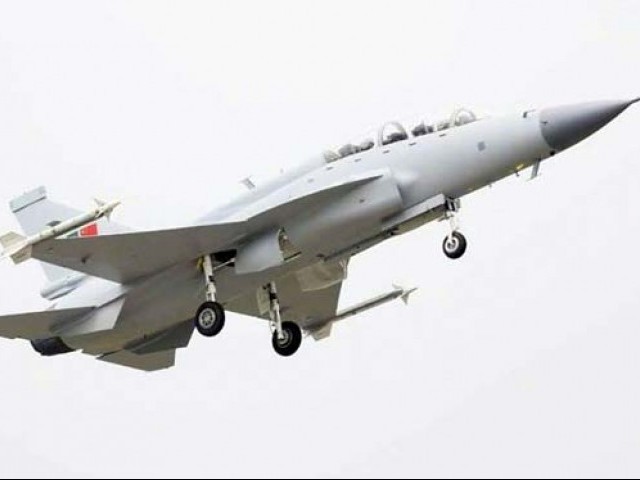 The dual-seat thunder aircraft was co-developed by Pakistan and China. PHOTO: INP

A modified version of the JF-17 Thunder fighter jet – co-developed by Pakistan and China – made its maiden test flight in Chengdu, China on Friday, the Pakistan Air Force (PAF) has said.

The JF-17B “is currently entering the testing phase”, the PAF said, terming the development of the dual-seater “a major milestone towards self-reliance”.

The JF-17B is slated to boost the operational and training capabilities of the PAF, the press release said.

“It will further enhance the advanced combat training of PAF fighter pilots on this indigenous war fighting machine.”

The JF-17B is the latest variant of the single-seat JF-17 fourth-generation multirole combat aircraft co-developed by the Chengdu Aircraft Industry and the Pakistan Aeronautical Complex, the leading aviation company in Pakistan.

The production of the first JF-17B was initiated by Pakistan and China during a joint ceremony at Chengdu Aerospace Corporation last year.

It was designed to meet the requirements of such planes from foreign clients and the international market, according to the AVIC.

The state-owned aircraft giant said the aircraft was capable of not only training pilots but also engaging in aerial combat and striking ground targets.

Yang Ying, general manager of China National Aero-Technology Import and Export Corp, the trade wing of AVIC, said: “The JF-17B is one of the best trainer and fighter jets in the international market.”

“Because of the JF-17’s excellent service record and the new plane’s good capability and competitive price, the JF-17B has received orders from the international market even before the maiden flight, which means our clients have a very high level of confidence in our development and production capacity,” he said at a news conference in Chengdu after the maiden flight.

Friendly fire may have killed US troops in Afghanistan, says Pentagon