The family, which includ­ed a nine-year-old girl, were attack­ed with iron rods and sticks­
By News Desk
Published: April 24, 2017
Tweet Email 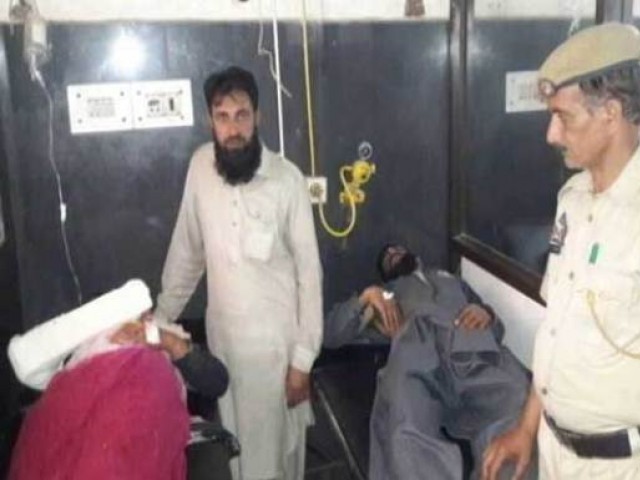 Five members of a family including a nine-year-old girl were injured in an attack by cow vigilantes in the Reasi district of Indian-occupied Kashmir. PHOTO/NDTV

Eleven suspected cow vigilantes were arrested in connection with a brutal attack on five members of a nomad family in Indian-occupied Kashmir’s Reasi area last week.

The family, which included a nine-year-old girl, were attacked with iron rods and sticks. The victims told the police that their entire flock, including cattle, sheep and goats were taken by the assailants.

An FIR was filed against the assailants. “We have registered an FIR. I have asked the DIG of Udhampur range to visit the area. Strict action will be taken against these goons,” Jammu and Kashmir police chief SP Vaid told NDTV.

The victims said they couldn’t forget the horror. “They beat us ruthlessly. Somehow we managed to flee from there. One of our children, a 10-year-old, is still missing. We don’t know whether he is alive or dead. They even beat our elders very badly. They wanted to kill us and throw our bodies into the river,” said Naseem Begam, one of the victims.

Police officials said the victims’ livestock was found during raids. The injured people were admitted to a hospital from where they have been discharged.

A video on NDTV shows the family pleading for mercy as attackers chanted slogans while breaking and burning their sheds. Police in Jammu said the attackers were members of a group of cow vigilantes. They were joined by a mob to attack the family.

However, police officials said the family was transporting their cattle without permission.

“Strict action will be taken. These people [the victims] were moving with their livestock without permission. They were intercepted by Gau Rakshaks and beaten up,” said senior Jammu and Kashmir police officer SDS Jamwal.

He added that  “we advise these nomads to travel with their livestock in the day and avoid travel at night. They should travel with proper permission”.

A police official, however, told Deccan Chronicle that police are reluctant to lay their hands on the culprits because of the law and order situation in the area.

The incident has sparked widespread anger among the Muslim population of the region, especially the nomad tribes. Authorities have been urged to take the vigilantes to task, a demand which has been endorsed by various social, religious and political organisations.

This story originally appeared on NDTV