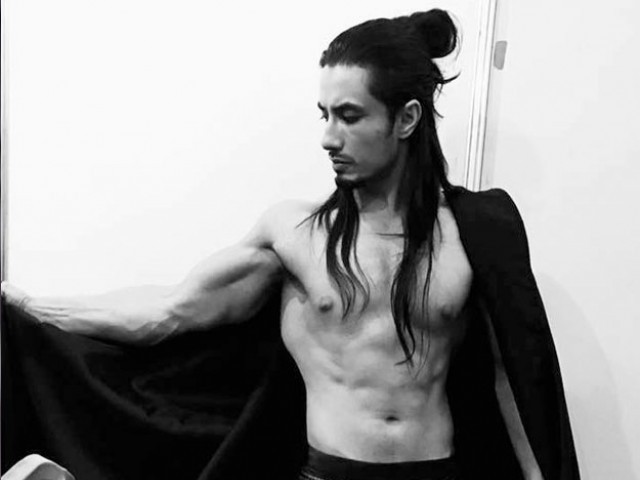 The rebirth of cinema has pushed many stars to reinvent themselves. With many internal and external factors cornering them to deliver, not many are able to completely reinvent their image. Some do, out of necessity – but then there’s Ali Zafar, who does it purely out of passion. From the Channo boy back in the early 2000s to the rockstar (jisey roz hota hai pyaar), Ali constantly pushes the boundaries for what an artist can do.

And now he has done it again for his Pakistani debut film Teefa In Trouble. For his role, he has bulked up to look like a true medieval action hero. He revealed his new look at Lux Style Awards 2017 in an epic period performance. Even though the styling and setup was just exclusively for the show, one thing we couldn’t ignore was how different the star looked.

Speaking to The Express Tribune, Ali shared that it took him about three to four months of rigorous training to achieve this physical transformation. “I had mixed martial arts training with modern-day gym techniques and most importantly, diet and dedication and a change in lifestyle,” said Ali. “But I feel mental health is way more important than physical and that comes through various mental exercises and meditation.”

Ali plays the titular Teefa in the romantic action-comedy film against the debutant Maya Ali as Anya. The Dear Zindagi actor also talked about stars getting stuck in the waltz. “I sometimes feel that artists or stars as you may call them get stuck in the hyped version or image of their own self and eventually become a caricature of their own image,” he said.

“Therefore, it is necessary to keep re-inventing yourself. During the process, you not only rediscover endless possibilities of your own mind and body but also give your audiences something new. For me, the process of learning is the key and that only happens when you break yourself and put yourself together, again and again.”

And the entire physical transformation isn’t just for looking good in the film. Ali is also performing his own stungs. “In Teefa in Trouble, the director wants to shoot action sequences that have never been seen before, which required extreme fitness and discipline. I like to do my own stunts because I don’t want to feel when I watch it on the screen that someone else has done this. It’s a high I get when I do it myself.”

Asked as to what will be the most interesting and unique thing we can expect from his Pakistani debut, Ali said, “Well, I think, to entertain people in a way I’ve never before. Be that with action, romance, song and dance, comedy or acting my heart out with intense emotion.”

As we anticipate the rock star to steal everyone’s thunder upon Teefa’s release, these photographs of the bulked up, badass Ali Zafar have made it almost impossible to wait.