The Godfather made its way into SC's Panamagate judgment

The Godfather made its way into SC's Panamagate judgment

The much awaite­d judgem­ent begins with a quote from The Godfat­her
By News Desk
Published: April 20, 2017
Tweet Email 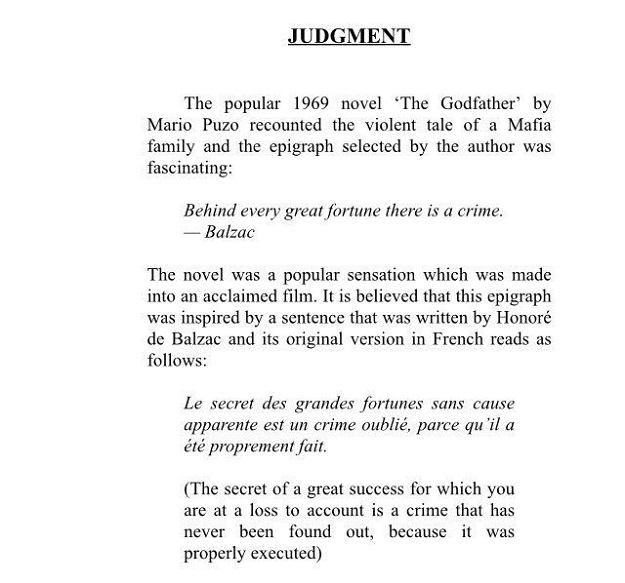 The Supreme Court’s verdict on the Panama case may have left many with mixed feelings but the 549-page-long judgment chose a rather interesting way to begin its judgment on corruption allegations against the Sharif family — a reference to Mario Puzo’s novel, The Godfather which also went on to become Hollywood’s most famous modern classic.

“The popular 1969 novel “The Godfather” by Mario Puzo recounted the violent tale of a Mafia family and the epigraph selected by the author was fascinating,” the judgement read, leading readers to an epigraph at the beginning of the novel.

“Behind every great fortune there is a crime – Balzac”

The judgment goes on to explain how the epigraph was inspired by a sentence authoured by Honore de Balzac. The original quote:  “The secret of a great success for which you are at a loss to account is a crime that has never been found out because it was properly executed.”

The court then observed how it was ‘ironical’ and a sheer coincidence that the present case revolves around the very sentence attributed to Balzac.  We don’t know what to make of the reference but it definitely caught the attention of people on Twitter. Here are some reactions:

Judge to Kulbhushan : Any last wish?
Kulbhushan: Want to hear the Panama Judgement before i die.
Via @obaidkh

The panama judgment starts from Godfather "behind every great fortune there is a crime".
pic.twitter.com/5Mqy49uZGe

In Godfather, Michael also said, "Only don't tell me Nawaz Sharif is innocent. Because it insults my intelligence and makes me very angry."

Surprised. #PanamaCase Judgement quotes 1969 Novel "The Godfather" by Mario Puzo about violent tale of a criminal mafia family,
& then JIT?

"Behind every great fortune there is a crime." – The Panama case judge is on fire with a Godfather quote in his judgment (via @SecKermani) pic.twitter.com/WGlZSfmfkA

In a 3-2 judgement, the bench noted that at present there was ‘insufficient’ evidence to remove Prime Minister Nawaz Sharif. The JIT has been given two months to complete the probe into the premier and his sons Hussain and Hasan, all of whom have also been directed to appear before the JIT. The investigators will also have to present bi-weekly reports to a special bench of the Supreme Court.