We are Mashal Khan: Civil society comes out in support of slain university student

We are Mashal Khan: Civil society comes out in support of slain university student

No one should take the law into their own hands, say activi­sts in Karach­i
By Mudaser Kazi
Published: April 15, 2017
Tweet Email 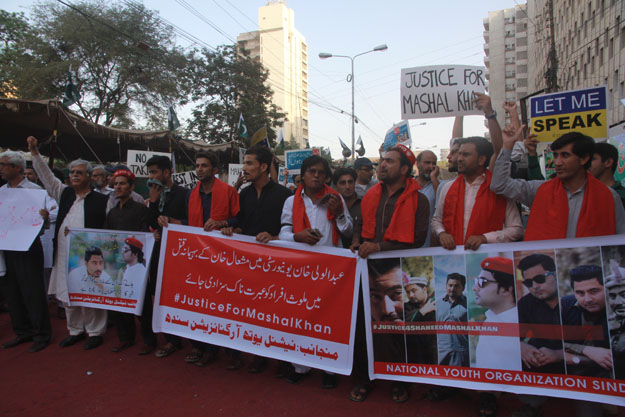 Citizens took to the streets to protest the killing of university student Mashal Khan on Thursday. PHOTO: ATHAR KHAN/EXPRESS

KARACHI: Slogans of ‘We want justice for Mashal Khan’ and ‘I am Mashal Khan’ echoed outside Karachi Press Club Friday afternoon when the Human Rights Commission of Pakistan (HRCP) led a protest along with other civil society organisations condemning the recent lynching of Mashal Khan, a university student, in Khyber-Pakhtunkhwa for alleged blasphemy.

The state is paralysed and has failed to control the monster of extremism in Pakistan, said the dean of social sciences at Shaheed Zulfikar Ali Bhutto Institute of Science and Technology, Dr Riaz Shaikh. “The younger generation is a symbol of change in any society but they have been radicalised in our country,” he lamented, adding that Khan’s lynching is a targeted attack against progressive forces. According to Dr Riaz, there is a dire need to change the mainstream education system and the government should take stern action against those propagating hatred in the media.

Senior coordinator at Pakistan Press Foundation, Lala Hassan, told The Express Tribune that such brutal incidents are common when the state declares itself to be religious. “Taking the law into our own hands and lynching someone is a murder of justice and such incidents will lead to civil war and anarchy,” he predicted.

Mahnaz Rehman of the Aurat Foundation said it is time that the state and justice system play their roles. “If anyone kills a person, it’s like they have killed the entire humanity,” she remarked, adding that the bloodshed of any person should be avoided. “We already have laws to deal with those committing blasphemy and no one has right to charge someone other than the courts.”

Karamat Ali from the Pakistan Institute of Labour Education and Research condemned the lynching of the young student. “We appeal to the government to implement Article 9 of the Constitution, which provides security to every citizen,” he said. As citizens and civil society members we can only raise our voices, since we do not have the mandate to try those involved in the incident, he added. “We ask the government to try the culprits according to due process as mentioned in the law.”

He said more than 50% of Pakistan’s population is below the age of 15 and it is the government’s responsibility to give them a peaceful and prosperous Pakistan.

HRCP’s Asad Iqbal Butt said the recent event is a weakness of the state. “The government has thrown their weapons down before extremism. The killing of a university student can never be justified on any level,” he said, adding that such incidents of extremism have damaged our societal fabric. He stated that the government has to make clear-cut polices against extremism.

Civil society member Shireen Asad said no religion allows us to kill someone the way Mashal Khan was killed on Thursday. “Our Constitution guarantees the rights of every citizen,” she maintained, adding that no one should be allowed to take the law into their own hands.

We won’t back down: CM should return municipal depts to local govt