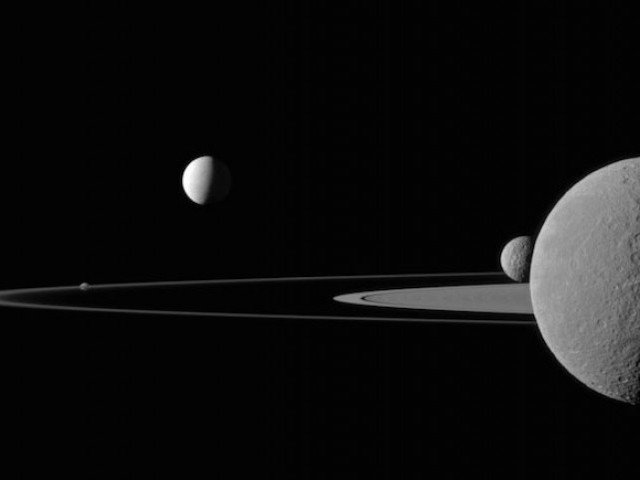 SATURN and its Moons. PHOTO: NASA

WASHINGTON DC: An ice-encrusted moon orbiting Saturn appears to have the conditions necessary for life, NASA announced on Thursday, unveiling new findings made by its unmanned Cassini spacecraft.

Cassini has detected hydrogen molecules in vapor plumes emanating from cracks in the surface of Enceladus, a small ocean moon coated in a thick layer of ice, the US space agency said. The plumes have led scientists to infer that hydrothermal chemical reactions between the moon’s rocky core and its ocean – located under the ice crust – are likely occurring on Enceladus.

On Earth, those chemical reactions allow microbes to flourish in hot cracks in the planet’s ocean floors – depths sunlight cannot reach – meaning the moon could also nourish life. “Now, Enceladus is high on the list in the solar system for showing habitable conditions,” said Hunter Waite, one of the study’s leading researchers. The new research, published on Thursday in the journal Science, “indicates there is chemical potential to support microbial systems,” he said.

The hydrogen detection resulted from Cassini’s October 2015 deep dive close to the surface of Enceladus. Using a spectrometer, the spacecraft determined that the plumes are 98 per cent water and one percent hydrogen, with traces of molecules including ammonia, carbon dioxide and methane.

Hydrogen had previously been ‘elusive,’ scientists said, but its detection shows the moon’s life-supporting potential. The hydrogen in the sub-surface ocean could combine with carbon dioxide molecules in a process known as ‘methanogenesis’, which creates a byproduct of methane. If there are indeed microbes living in the moon’s ocean, they could tap that energy source as sustenance.

Scientists said the moon appeared to have ample energy supplies to support life – roughly the equivalent of 300 pizzas per hour, according to Christopher Glein, a geochemist at the Southwest Research Institute in Texas. “This is the first time we’ve been able to make a calorie count of an alien ocean,” he said.

Though Cassini does not have instruments capable of actually finding signs of life, “we’ve found that there’s a food source there for it,” said Waite. “It would be like a candy store for microbes.”

Jeffrey Seewald of the Woods Hole Oceanographic Institution echoed those comments in a companion article to the study: “This observation has fundamental implications for the possibility of life on Enceladus.”

“Chemical disequilibrium that is known to support microbial life in Earth’s deep oceans is also available to support life in the Enceladus ocean.”
In a separate study published in The Astrophysical Journal Letters, scientists using the Hubble Space Telescope again found what is likely a plume emitting from Europa, one of Jupiter’s four largest moons, which also has an icy crust atop an ocean. After first spotting the apparent plume in 2014, scientists in 2016 saw it in the same spot, which appears to be a particularly warm region of Europa where fissures occur in the icy crust.

Both studies are laying the foundation for the Europa Clipper mission, which is slated to launch in the 2020s. The Europa Clipper will periodically fly past Jupiter’s Europa moon to collect data and study the subsurface ocean.

“If there are plumes on Europa, as we now strongly suspect, with the Europa Clipper we will be ready for them,” said James Green, NASA’s Planetary Science Division Director.

Cassini is slated to take a death plunge into Saturn’s atmosphere in September, after it takes a final flyby of the giant moon Titan and a performs a series of 22 dives between the planet and its rings.

The decision to end the mission was made in 2010, in order to avoid damaging moons like Enceladus, which could be explored for signs of life in the future. Researchers called its latest discovery a “capstone finding for the mission.”

“We’re pushing the frontiers. We’re finding new environments,” said Green. “We’re looking in a way that we never thought possible before for environments in our solar system which may harbor life today.”