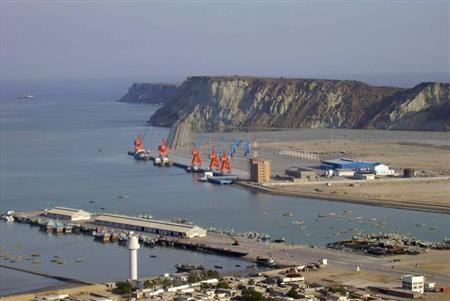 A general view of Gwadar deep-sea port on the Arabian Sea. PHOTO: REUTERS

It is hard to imagine going without clean drinking water for 15 to 20 days consecutively, but for the citizens of Gwadar, it is a fact of life. Residents of this coastal city get clean drinking water for just one hour, every two to three weeks. For poor people this means rationing potable water to make it last from one distribution to the next, while for others, those who can afford it, it means forking out six to ten thousand rupees for a water tanker.

“If you come to Gwadar, bring clean drinking water. These days it’s the most valuable gift you can give,” a friend from Gwadar messaged recently. He was joking, of course, but in truth the problem of access to potable water is no joke. And the citizens of Gwadar have been in this situation for decades.

The powers that be in Islamabad seem to think that the multibillion CPEC projects will somehow transform Balochistan and free it from the dual scourges of poverty and insurgency that have plagued the province for years. Politicians and the military establishment initiate ambitious projects with great fanfare, claiming that they will turn Pakistan into the next Asian tiger. If they are to be believed, these $46 billion initiatives have the potential to change the life of every single Pakistani, and the citizens of Balochistan stand to gain the most. Any expression of doubt as to the feasibility of these claims is met with accusations of conspiracy. One notable “wonder project” is Gwadar International Airport. Started in 2002, it is yet to be completed. For the residents of Gwadar the project has yielded nothing but empty promises for over a decade. Is it any wonder that people are skeptical?

At this point, when it comes to such elaborate, ambitious projects, the reservations of the people of Balochistan could fill an entire book. And yet, incredibly, not even the concerns of the elected representative of Gwadar, Mir Hamal Kalmati, are heeded. Islamabad views such reservations as proof that even in the 21st century the people of Balochistan resist development, preferring to place their trust in the tribal system. When it comes to Gwadar, however, such opinions are neither here nor there, since Gwadar is in Makran, a mostly middle class area where there are no tribal chieftains or Nawab Sardars.

Over the years, many people have sought to draw attention to the gravity of the water supply issue in Gwadar. The problem is not new. In fact, it has a decades long and sometimes bloody history. On February 21st 1987, three people — a man, a woman, and a child — were shot dead while taking part in a protest to pressure the administration into providing clean drinking water.

Why does this untenable situation persist year after year? It’s not too difficult to comprehend. It can be stated in a single sentence: Over 200,000 people in this port city are in desperate need of access to clean drinking water. And yet for some reason, a solution to this very basic problem has not been forthcoming. Let’s take a look at what the government has been doing to address it.

When the water shortage was brought to the attention of the mainstream media — itself a rare occurrence when an issue concerns Balochistan — the PML-N’s senior leader Ahsan Iqbal responded, rather naively, that his government had approved the construction of a desalination plant capable of producing five million gallons of water per day. That would certainly be an adequate supply of water and the idea itself is a sound one. If only Ahsan Iqbal had been the first official to announce such a plan. Maybe then people would actually have believed him. What he would have discovered, had there been someone there to enlighten him, is that there were already four desalination plants lying idle in Gwadar district — one each in Jiwani and Pasni, and two in Gwadar city — installed by the PPP-led government back in 2008.

The Balochistan Development Authority (BDA), a department notorious in the province for incompetence, dysfunction and corrupt practices, was assigned the job of installing these plants. The cost for the plant in Gwadar’s industrial area was Rs1 billion. It had a capacity of two million gallons of water per day. The other three plants, each with a capacity of 200,000 gallons per day, were installed in the relatively prosperous areas of Pasni, Jiwani and Singhar Housing Scheme, at a cost of Rs200 million each.

The BDA awarded contracts for the plants, machinery was purchased and shifted to Pasni and Jiwani for installation, and work began. But, in typical BDA fashion, the installation itself is yet to be completed. The National Accountability Bureau (NAB) launched an inquiry into the delay in the installation of machinery in the plants, but to no avail.

That was not the end of the incompetence. The government also spent 4.4 million rupees to send four officials to Dubai for training. The plan was that they would return to operate the plants. It has now been nine years and the whereabouts of these trained officials remains a mystery.

And yet the fancy Pearl Continent Hotel in Gwadar has somehow managed to have a desalination plant working successfully for years and is selling 100,000 gallons of drinking water a day to the public health engineering department so that they can supply the people of Gwadar with drinking water.

Ankra Dam, the one dam serving Gwadar and its population of 200,000, dried up and silted years ago. Constructed in 1992 on 17,000 acres, the area it draws from has since shrunk to less than 8,000 acres. Since neither provincial nor federal governments have bothered to construct another dam in the more than two decades since the Ankra Dam began to fail, precious and desperately needed rainwater is left to flow into the sea and goes to waste. Though the government of the day announced plans for the construction of multiple small dams in the Makran region, actual work on those projects never really got off the ground.

The infrastructure in Gwadar is quite primitive, closer to the 19th century in places than the 21st. Electricity is supplied by Iran, people go to Karachi for treatment of even minor diseases, and there are not enough schools and colleges to educate the youth of the region. This begs the question: What exactly is being built in Gwadar? If economic zones, then surely they need electricity for that? And yet the local people don’t even have potable water.

It is easy to sit in a mansion in Islamabad, making empty promises. It is even easier to dismiss expressions of genuine concern and criticism as an international conspiracy. The people of Gwadar are in urgent need of water. It is their constitutional right and the government is failing to provide it. Transforming Gwadar into a Pakistani Dubai, New York, or Shanghai can wait. Drinking water for the people of Gwadar cannot.