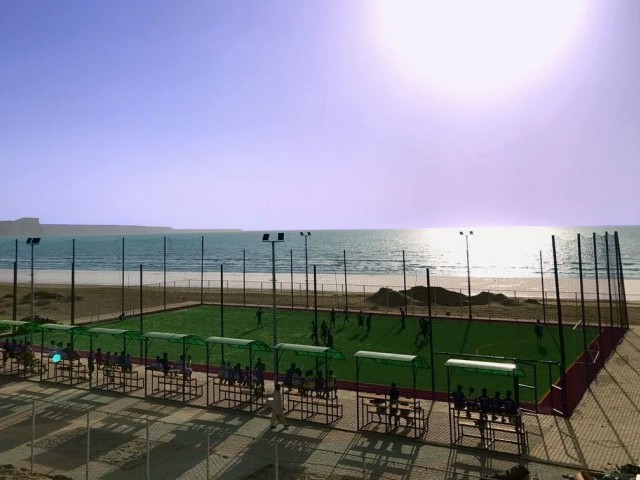 The facilities, based in the Islamabad and Rawalpindi, cater for all football players of all ages, genders, skill levels and socio-economic classes.

Players can utilise the facilities by booking time slots or participating in various tournaments that are organised or hosted by Total Football. The facilities are also used for other events including training, for both children and adults, as well as for non-profit community engagement activities.

Working with the Balochistan government, under the stewardship of Chief Secretary Saifullah Chatha, Total Football has introduced the same model in Balochistan, and has developed two facilities in the province, one each in Quetta and Gwadar.

Football has played a pivotal role the sporting culture and history of Balochistan. The province has consistently produced some of Pakistan’s best football players.

Furthermore, the facilities will play a positive role in actively engaging the youth of the province in a healthy sporting activity, and improving community welfare through activities and events for the underprivileged segments of society at these football facilities.

On the occasion, Hamza Kayani, CEO of Total Football said, “Developing these facilities in Balochistan is more than just a job for us. As Pakistanis, we, at Total Football, feel proud to make a positive contribution to the welfare of Balochistan.

“I want to use this occasion to positively publicise Balochistan’s love affair with football. I have been overwhelmed by the positive response regarding these projects from the people that we have meet in Quetta and Gwadar.

“The facility in Gwadar, in particular, is one of the most scenic in the world with breathtaking views of the Arabian Sea right behind it. Therefore, in addition to its positive impact for the people of Gwadar as a sporting facility, it also adds to the aesthetic beauty of the coastal city.”

“When you go to Ayub Stadium in Quetta, around 10 matches are being played on one, grassless football ground at the time same time.

“All you can see from a distance is a cloud of dust. This is clear proof of the passion and demand people of Quetta have for football, and I am certain the international-standard facility that has been setup by Total Football will match their passion and give them the opportunity to play the beautiful game in the best possible environment.” added Kayani.

“Similarly, in Gwadar, the local football enthusiasts can be seen wearing shirts of the top European football clubs. Some of them are local fisherman who go fishing in the morning wearing their football jerseys, and after returning in the evening they play football with bare feet on the beaches. Fish carcasses are usually lying close to where they are playing football but that doesn’t keep them from playing because they view football as an escape from all the difficulties and stresses of their daily lives. Now, with the new, scenic football facility in Gwadar by the coast, these and other local players will be able to pursue and enjoy their passion in a world-class footballing environment.”