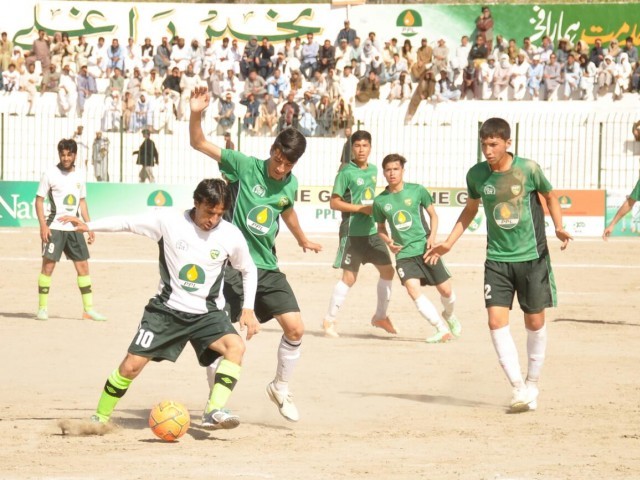 KARACHI: Chaman manager Muhammad Ali, whose team has reached the final of the 2017 PPL Balochistan Cup and will take on Panjgoor on Sunday, believes the tournament will give more opportunities to players to play football this year.

“Football in Balochistan is extremely popular while football in Chaman is more than a sport; it’s a part of our lives. I’m happy to see such events happening; I’m sure it will lead to more events in the future,” Ali told The Express Tribune.

Chaman, who are renowned for producing top footballers in the country such as Kaleemullah, Essa Khan and Mahmood Khan among others, are favourites to claim the title and Ali is confident his team will deliver.

“Reaching the final this year wasn’t easy and we are seeing worthy opponents in Panjgoor. They have improved a lot from last year. We have worked hard in preparing the team, and it is that hard work which has gotten us this far. Now we need to win the title. Our people are waiting for us to take this trophy home,” he said.

Balochistan Cup: A ray of hope for Hazaras

Ali, meanwhile, said that events like the Balochistan Cup will help in improving the skills of the players and lead to healthy competition. He explained that there are a whopping 120 clubs in Chaman alone and the players will look forward to giving their best as the matches are being aired on television.

“The semi-finals and final will be aired on TV and that is a huge motivation for my players. I was telling them before the semi-final that none of the local players got this kind of exposure before; any club or department can watch their matches and pick them. They will get a chance to have fans from around the country,” said Ali.

The tournament is also motivating players through monetary rewards such as the Rs5,000 cash prize for every man of the match, while all the semi-finalists received Rs250,000. Meanwhile, the winners of the tournament will bag Rs650,000.