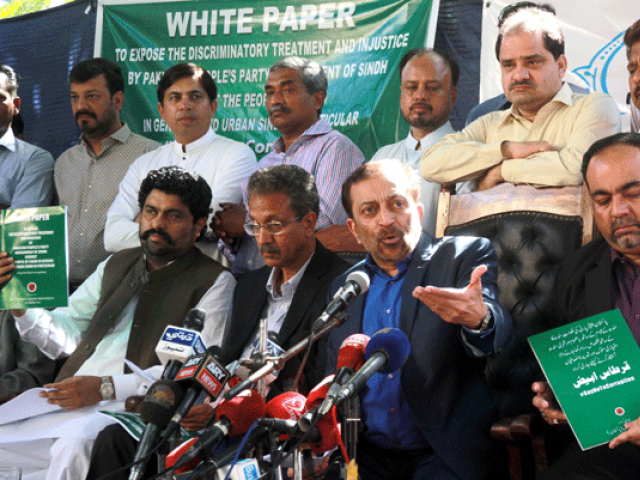 In a press conference at Karachi Press Club, MQM-Pakistan Convener Dr Farooq Sattar and other leaders issued a ‘white paper’ against the PPP, saying that the rival party systemically kept the urban centres in the province deprived of their due rights and fair share in the funds and resources. PHOTO: ATHAR KHAN

KARACHI: The Muttahida Qaumi Movement (MQM) – Pakistan finally issued on Wednesday a report what it called a ‘white paper’ against the performance of the Pakistan Peoples Party (PPP)-run Sindh government in the last nine years and accused it of committing unprecedented mismanagement, disorder and corruption.

In a press conference at Karachi Press Club, MQM-Pakistan Convener Dr Farooq Sattar said the PPP systemically kept the urban centres in the province – Karachi, Hyderabad, Sukkur, Mirpurkhas and Nawabshah – deprived of their due rights and fair share in the funds and resources.

The ‘white paper’, written in Urdu, comprises 13 pages. It contains several allegations against the provincial government, summed up in 11 points such as the ‘unjust’ distribution of resources among district governments and metropolitan corporations, practice of quota system and discrimination in jobs and appointments.

The first point in the report read that the Sindh government did not implement the National Finance Commission’s Distribution of Revenue and Grants-in-Aid Order, 2010, to keep the local governments deprived of powers, resources and funds. “The non-implementation benefited the PPP’s politics of inheritance and helped feudalism grow stronger,” it added.

The MQM-Pakistan maintained that neither the funds were transferred to their rightful owners nor were they spent on development schemes in the province and to uplift the living standard of the people. “The reasons behind this malpractice were obvious that the PPP wanted to keep both the rural and urban centres under its influence.”

The party demanded that the development funds should be distributed on the basis of Gross Revenue Receipts: 57.5% should go to the district and local governments and the remaining 42.5% to the provincial government.

In the second point, MQM-Pakistan said the urban centres of the province were the most affected due to the financial constraints imposed by the PPP-led government. Ironically, it added, these centres were the biggest contributors of revenue but were deliberately left deprived because the MQM enjoyed a considerable representation and vote bank in these areas.

Continuing the same contention in the third point, the party said that Karachi contributed around 68% of the total revenue to the federation and 88% to the province but in return it ‘hardly’ got back 2% to 3% and 7% to 8% from the ruling centres, respectively.

Mentioning the 18th constitutional amendment, which devolved the mandate on sales tax on services to the provinces from the centre, MQM-Pakistan commented that Karachi generated around Rs65 billion out of a total Rs70 billion collected as sales tax from the province but unfortunately was not returned ‘even a single penny’.

The fourth and fifth point read that the PPP-led government robbed the urban centres of their due rights and unlawfully, illegally and out of political motives transferred them to the rural parts. They also talked about the powers taken away from the local bodies, leaving them in a state that they were unable to do anything.

In the sixth and seventh points, the party mentioned that the right with the governor to appoint the chairperson and members of the Sindh Public Service Commission, vice-chancellors and heads of the education boards was taken away and given to the chief minister so that he could exercise a free hand in making ‘political’ appointments.

It further mentioned the alleged land grabbing in the name of cooperative societies and irregularities at the revenue board and other governmental departments.

2016: The most turbulent year for Altaf Hussain?

Further, the party mentioned that though the quota system, which advocated 60:40 ratio between the rural and urban parts of Sindh, was abolished in 2012, the provincial government was unconstitutionally and unlawfully implementing it. “[Even] the 40% share of the urban centres was also overlooked by making in-house appointment and transfers.”