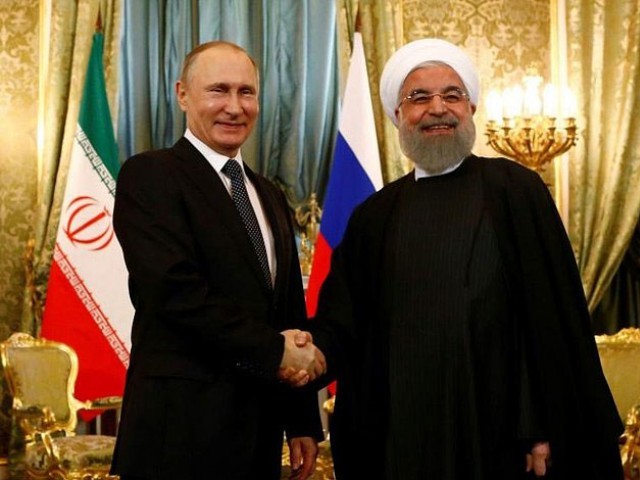 MOSCOW: Russian President Vladimir Putin on Tuesday was hosting his Iranian counterpart Hassan Rouhani for talks that are being closely watched for signs of their next moves in Syria.

Rouhani’s first official visit to Russia comes as the two backers of the Syrian regime push for ways to end the six-year conflict in the country, having done much to marginalise US influence in peace talks.

At the start of their meeting, Putin told Rouhani that Moscow and Tehran “work very effectively, practically on all fronts, in international action and the resolution of major and very grave international problems,” state television showed.

Iranian foreign ministry spokesperson Bahram Ghasemi said ahead of Rouhani’s trip that the leaders would discuss “regional issues especially the Syrian crisis, solutions to end it quickly,” as well as ways to counter “terrorism and extremism”.

The visit also comes as splits emerge between the countries, the primary allies of Syria, over the role to be played by Turkey, which is backing opponents of the regime.

Moscow has formed an unlikely alliance with Ankara since 2016, envisioning Turkey as part of a solution to the Syrian conflict.

But Iran has been more wary about Turkey’s involvement in efforts to end hostilities, with tensions mounting after Moscow and Ankara left Tehran out of a truce they brokered in December.

Rouhani — accompanied by Foreign Minister Mohammad Javad Zarif, Oil Minister Bijan Zanganeh and other high-ranking officials — is expected to sign a slew of economic cooperation agreements with Russia, according to Iranian state media.

The Kremlin said in a statement this month that Rouhani’s trip would focus in part on “the prospects of expanding trade, economic and investment ties.”

It said that a “variety of bilateral documents” would be signed at the end of the meeting but did not specify in which fields.

Kremlin spokesman Dmitry Peskov said earlier Tuesday that Moscow was striving to bolster its relations with Tehran, which he said had “very solid potential”.

In addition to cooperation on Syria, energy and defence ties have deepened between Iran and Russia despite meagre trade relations.

Russia is to build nine of Iran’s 20 proposed nuclear reactors and has emerged as a long-term arms partner, supplying Tehran with its S-300 air defence missile system.

The relationship has blossomed under Rouhani despite the countries having a complicated history over territory, oil and Communist ideology.

Rouhani is looking to boost Iran’s economy ahead of elections in May, in which he is expected to stand for a second term.

Iran and Russia have become increasingly allied in Syria, providing support that has propped up President Bashar al-Assad.

Russia’s entry into the conflict in September 2015 — when it began launching air strikes to shore up Assad’s forces — helped turn the tide for the Syrian regime, while Iran has provided military advisers and frontline militia fighters.

More than 310,000 people have been killed in Syria since the conflict broke out in March 2011 with protests against Assad’s rule.