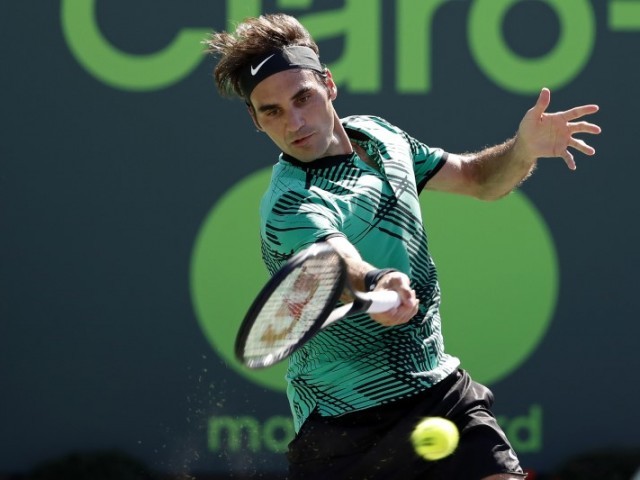 MIAMI: In-form Roger Federer powered his way into the fourth round of the Miami Open with a 6-3 6-4 win over Argentina’s Juan Martin del Potro on Monday.

Del Potro always enjoys plenty of crowd support in Miami, which has a large Argentine community, and it was the same story again with football-style chants of support ringing out for the 28-year-old on a packed Crandon Park center court.

It was the pair’s first meeting since 2013 and having won 15 of the previous 21 encounters, Federer was favorite – but the crowd factor gave the third round match an added edge.

“Shortly before I walked out to the court, you could sense the atmosphere. That’s when I told myself, Just be prepared for something different, you know. It was different,” said Federer.

He was forced to save four break points in the first set but he got ahead with a thundering forehand to take a 5-3 lead and served out for the set.

Indian Wells: Federer to pull his Sock-s up against Jack

The Argentine had a chance to turn things around when he had a break point in the second set with 4-3 down, but Federer, moving well and looking full of confidence, held firm and wrapped up the match in one hour and 22 minutes.

“I felt like I was in control and I was able to generate more chances than he did,” said Federer. “I felt like he got his chances a little bit out of nowhere, maybe because I dropped my level ever so slightly and gave him few easy points, and that’s how he sort of got more chances on my serve.

“I feel like I earned it more. I was more the aggressor. It was more on my racquet, and I like it that way.”

Federer, whose successful return from a six-month injury layoff has also included a win at Indian Wells this month, will face 14th seeded Spaniard Roberto Bautista Agut in the next round.