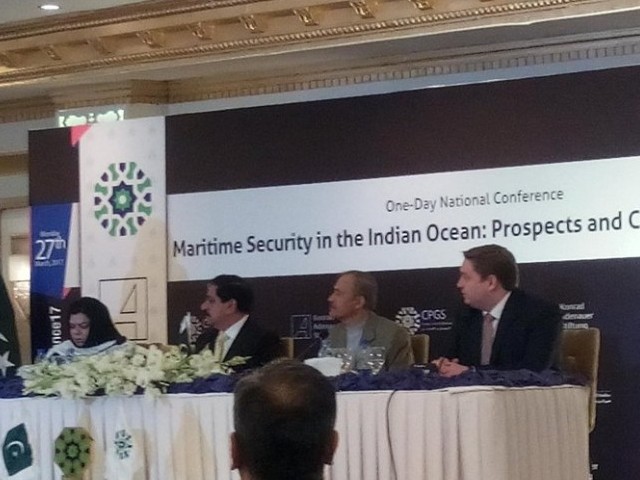 The maritime security conference was held in Islamabad on Monday. PHOTO COURTESY: TWITTER/@RajaAsadAzad

ISLAMABAD: Pakistan has voiced serious concerns over the growing strategic partnership between India and the United States, saying the ‘logistic exchange pact’ between the two countries had put the vision of ‘Asia Century’ under jeopardy.

In August last year, India and the US signed an agreement governing the use of each other’s land, air and naval bases for repair and resupply, a step toward building defense ties as they seek to counter the growing maritime assertiveness of China.

He said the vision of ‘Asia Century’ was under stress because “security architecture and strategic stability of the region had come under stress.”

“India and the US have carved out space to preposition themselves on this ocean. India is being propped up as a counter-weight to China through geo-political, economic and military moves.”

The conference was held to analyse the challenges in the realm of maritime security emanating from militarisation and nuclearisation of Indian Ocean and power projection by states maintaining presence in the area, emerging alliances in the region and threats to CPEC, in additional to non-traditional challenges like terrorism, piracy, food security and environmental concerns.

Unveiling the recommendations of the conference, President CPGS Sehar Kamran said fulfillment of the vision of ‘Asian Century’ needs a focus on 3Cs – connectivity, cooperation, and communication.

The recommendations placed special emphasis on the development and modernisation of Pakistan Navy for being the guardians of the maritime boundaries. “Pakistan should increase and modernise its naval fleet, and pursue technological advancements in sea-based deterrents to ensure an assured second strike capability, especially in the context of the growing threats by the belligerent India.”

Federal Minister for Defence Production Rana Tanveer Hussain said “there is no surprise that our competitors are opposed to the China-Pakistan Economic Corridor (CPEC), and are already seeking to sabotage it.”

“It is of the utmost importance, therefore, we should be fully prepared to deal with any and all challenges that may arise as these opportunities unfold, not the least in the maritime arena.”

Former deputy chief of naval staff Vice Admiral (retd) Iftikhar Ahmed said, “If we have the requisite infrastructure and enabling environment at Gwadar and the region, Gwadar will surely emerge as the economic hub of the region.” He stressed that Iranian port Chahbahar posed no challenge to Gwadar and the two could compliment each other.

Other speakers called for a broad based national maritime policy, modernisation of navy, and expansion of diplomatic engagement with the littoral states of the Afro-Asian Ocean Region (more commonly known as Indian Ocean) for peace and security. They  also called for capitalising on the opportunities created by CPEC.

Husband ‘kicks out’ wife from house over ‘fake’ Facebook ID