The US milita­ry has made clear it wants to do more with India, especi­ally in counte­ring China
By Reuters
Published: August 30, 2016
Tweet Email 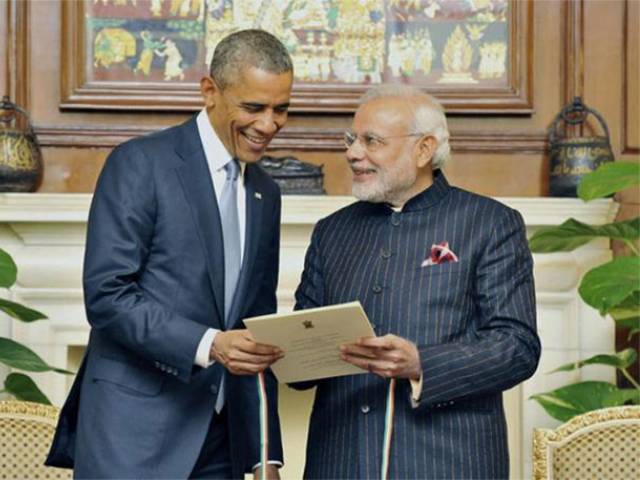 The US military has made clear it wants to do more with India, especially in countering China. PHOTO: REUTERS

The United States and India signed an agreement on Monday governing the use of each other’s land, air and naval bases for repair and resupply, a step toward building defense ties as they seek to counter the growing maritime assertiveness of China.

The agreement, a relatively mundane one concerning day-to-day military logistics, is nonetheless a milestone in the US-India defense relationship because of the outsized political importance it had taken on in India, where it had touched on domestic sensitivities, experts said.

India, US closer to pact to share military logistics: officials

The signing of the agreement will “make the logistics of joint operations so much easier and so much more efficient,” US Defense Secretary Ash Carter said in a news briefing with Indian Defence Minister Manohar Parrikar on Monday.

The agreement will allow the Indian and US navies to have an easier time supporting each other in joint operations and exercises and when providing humanitarian assistance, Parrikar said.

Washington’s desire for deeper security cooperation with India had been complicated without the signing of the logistics agreement as well as two other pacts that would allow for secure communications and the exchange of nautical and other data. The agreements are considered routine between the United States and its other defense partners.

But India has had concerns such an agreement would commit it to hosting US troops at its bases, or draw it into a military alliance with the United States and undermine its traditional autonomy. Carter and Parrikar reached an agreement “in principle” in April, but had yet to finalise the details.

Carter has made closer military ties with India a priority, and established a special unit within the Pentagon last year to promote cooperation with that country. Parrikar’s visit to Washington this week marks the sixth interaction between the two top defense officials.

The signing of the logistics agreement indicates the priority the government of Prime Minister Narendra Modi places on a closer defense relationship with the United States, said Benjamin Schwartz, until last year the India country director at the Pentagon.

“For years, there has been tremendous misinformation put out into the Indian press about these agreements,” said Schwartz, now with the US-India Business Council, which promotes trade ties between the two countries.

“What the signing of this shows is that the Modi government is willing to take and suffer the short-term political criticism of signing these things for the longer-term benefit of building the defense relationship with the United States.”

Both Carter and Parrikar went to pains on Monday to make clear that the logistics agreement did not allow for basing of US troops in India. “It’s not a basing agreement of any kind,” Carter said.

The debate over the logistics agreement had served as a vehicle for the distrust some of India’s political class has toward the United States, said Shane Mason, a research associate at the Stimson Center. The United States had previously imposed sanctions on India related to its 1998 nuclear test, although the sanctions were eased later.

“From the US perspective this was kind of a low hanging fruit,” Mason said. “We have logistic support agreements with many, many other countries and in most cases it’s a relatively uncontroversial thing.”

The US military has made clear it wants to do more with India, especially in countering China, which US officials say is risking stoking conflict through its claims in the South China Sea, a vital trade waterway.

Without naming China, both Carter and Parrikar mentioned the importance of the free flow of trade to both countries.

“India and the United States have a shared interest in freedom of navigation and overflight and unimpeded commerce as part of rule-based order in (the) Indo-Pacific,” Parrikar said.