Prove your identity: For park goers, CNICs mandatory for entry

Prove your identity: For park goers, CNICs mandatory for entry 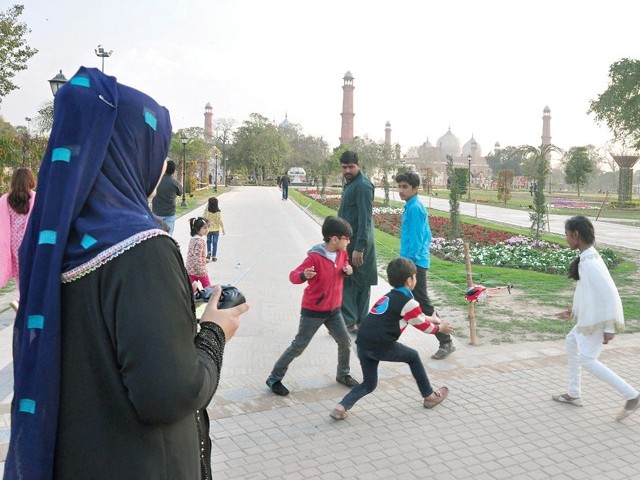 Children play with a remote-controlled helicopter at Iqbal Park. PHA has made it mandatory for everyone to show their identity card at parks. PHOTO: ABID NAWAZ/EXPRESS

LAHORE: For Syed Ali’s wife, not carrying her national identity card ruined the couple’s weekend. They were denied entry at Jilani Park on Sunday, after the woman failed to prove her identity at the gate. The security guard gave Ali two choices: go home or go inside without his wife.

And this is what many park-goers in Lahore are going through. The Parks and Horticulture Authority has silently enforced a new rule at all parks across the city, making it mandatory for every person to produce his/her identity card at the entry point.

The watchmen at the entry points have been directed to allow families with senior citizens and children to enter the parks after checking the national identity cards (CNICs) of the male family members.

The rules are different, however, in the case of couples or groups of youngsters: everyone must have their identity card.

Boys and girls aged under 18 must have their domicile if they want to enter the park otherwise it is a no-go, a guard at Jilani Park told The Express Tribune.

But Ali, who lives in Gulberg, is not impressed. “Why do they want to see the CNIC of my wife when I have already shown mine?” he says. “This is absurd. What kind of a security state, the government is turning Lahore into?”

When the couple insisted on going into the park without the woman’s identity card, the guard asked Ali’s permission to ask his wife a few questions to determine if she was actually his wife. “How can the PHA administration be so incompetent?”

The guard, who requested anonymity, reasoned if the woman knew the name of her father-in-law, the couple is ‘genuine’. “If not, they are denied entry or asked to show their CNICs,” he said, adding this was done only before 4pm when female guards were not on duty. “After the female staff arrives, it is for them to decide.”

But not all guards are following the new rule strictly.

A guard at Bagh-e-Jinnah said he had allowed everyone to enter the park without CNIC, as the new regulations were “pointless”. He, however, admitted he only eased the rule after making sure he is not risking inspection from PHA officers.

“Many people fight with us when the deputed police constable is not around,” he said, adding that checking each and every single CNIC was futile.

“We do not want the park to become a dating point but we cannot stop married couples or groups of children from entering,” the guard said. “Even then, parks are not a place for huge public gatherings so why the CNIC rule?”

PHA Director-General Mian Shakeel told The Express Tribune that security was on high alert at the popular public parks after receiving threat alerts from the government. “While it is a must to show CNICs at the entry points of parks, there are no such instructions to check the identity card of each and every person as there are children and elders in families,” he said.

“Similarly for couples, only one CNIC is enough, Shakeel clarified, reverting from his earlier stance when he said guards were checking CNICs of females as well due to security concerns.

A PHA official said the guards were directed to check CNICs after the Mall Road blast. “Much has been left for the on-duty guards to decide,” he said.

The rules have been communicated to managements of 19 parks in Lahore. Though only some are following the instructions.