In Iraq's Mosul, a school becomes a field hospital

Like many buildings in Mosul, the school bears the signs of warfare

Members of the Iraqi forces tend to a civilian who was injured by Islamic State (IS) group militants at a school turned hospital in western Mosul on March 24, 2017. PHOTO: AFP
MOSUL:

Fifteen-year-old Mohammed enthusiastically helps the staff of a makeshift hospital set up in the bullet-scarred school in west Mosul where he himself studied before militants seized Iraq's second city.

The Islamic State group used the school as part of its programme of indoctrination until it lost control of the area during a major Iraqi offensive launched last month, and it is now used to treat people wounded in the ongoing battle for the western side of the city.

Like many buildings in Mosul, the school bears the signs of warfare.

In addition to being pockmarked with bullets, most of the windows are broken, walls are cracked and the floor is littered with bullet casings.

The entrance hall has been transformed into an emergency room, which is stocked with only limited equipment but still allows for first aid to be administered to the wounded and sick. 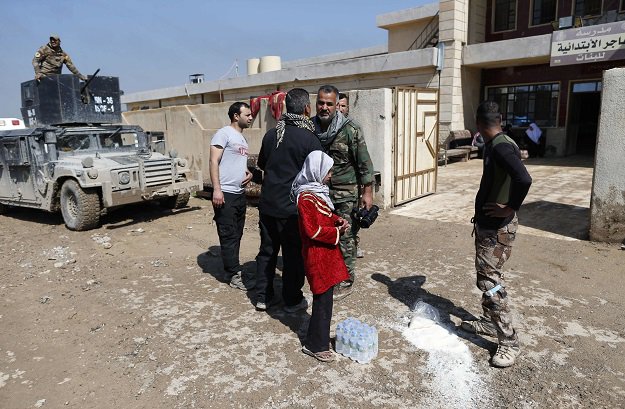 Members of the Iraqi forces and civilians stand outside a school turned hospital in western Mosul on March 24, 2017. PHOTO: AFP


One young man lies on a narrow bed, his face pale and tired.

"A sniper [from IS] fired at him but missed, so he started to run, and the sniper shot again and hit him," says Fathi Waad, one of the victim's relatives.

"This is the third time that someone in the family has been hit by a sniper," he adds.

Each day, the hospital looks after around 100 patients, both civilians and security personnel, often the victims of gunshot wounds, says Aqil Karim, a medic from the elite Counter-Terrorism Service.

A dust-covered red pickup suddenly stops in front of the school to deliver a semi-conscious old man whose foot has been injured.

Unlike the previous patient, he is not the victim of violence, but rather of an accident, and he is also suffering from dehydration. 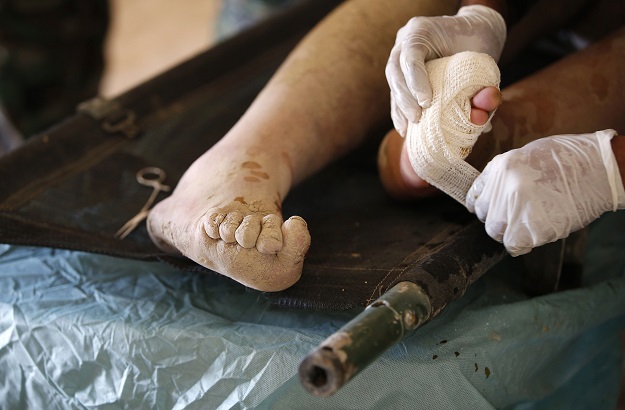 A close up shot shows the hands of a member of the Iraqi forces tending to a civilian who was injured by Islamic State (IS) group militants at a school turned hospital in western Mosul on March 24, 2017. PHOTO: AFP


As soon as he arrives, he is carried to a bed, where his wound is washed, disinfected and dressed. Treating him is just as important as tending to those wounded by war in a city where the fighting has destroyed many medical facilities.

More than 200,000 Iraqis have fled west Mosul since Iraqi forces began the assault to retake the area on February 19, the government says, but hundreds of thousands more are still in danger inside the city.

With school lessons unlikely to resume at any time soon, several former pupils have returned to the building to help the medical staff.

Indifferent to the sound of gunfire and explosions outside, one of them rushes around helping out where he can, dressed in a tracksuit with a blue hood.

Mohammed has barely finished unloading a delivery of equipment when he is already back inside handing out food rations.

"We cook, clean the equipment, and when wounded people arrive we help them," says the slender teenager, who is delighted no longer to be in class under the militants.

"Our teachers were hard on us. They'd beat us," he says. "And they'd ask us to pledge allegiance to IS."

But Mohammed does not see a future for himself in the ruins of a city disfigured by months of heavy fighting. Instead, he yearns to join his relatives in the United States.

His dream job once there? "Doctor" of course.