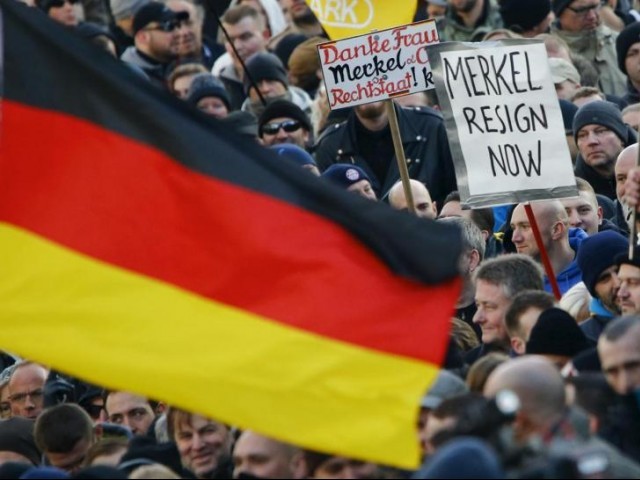 Supporters of anti-immigration right-wing movement PEGIDA (Patriotic Europeans Against the Islamisation of the West) demand the resignation of German Chancellor Angela Merkel on a placard during a demonstration rally in Cologne, Germany. PHOTO: REUTERS

FRANKFURT (ODER): A social worker in the drab eastern German city of Frankfurt an der Oder admits she feels isolated at work whenever talk turns to the country’s record influx of refugees.

“I have to say that my colleagues are not very friendly towards foreigners and I am almost alone in my opinion,” Elisabeth, who gave just her first name, told AFP.

Foreigners are rarely seen in the former communist city about 100 kilo metres east of Berlin, but as in much of eastern Germany, there is deep suspicion toward migrants.

With its attacks on Chancellor Angela Merkel’s decision to let in around a million asylum seekers since 2015, the right-wing populist Alternative for Germany (AfD) party has found fertile ground in the east. At the last state elections in 2014, before Germany’s migrant crisis erupted, the AfD won 11 seats in the state assembly of Brandenburg, where Frankfurt an der Oder is located.

Police commissioner Wilko Moeller, who leads the city’s local chapter of the AfD, noted that the region offers “great potential” for his protest party.

In an illustration of how favourable the climate is for the AfD, its deputy chairman Alexander Gauland is running for a national seat in Frankfurt an der Oder in the September 24 general elections.

With its tall concrete residential blocks in the centre of town, Frankfurt an der Oder, at the border with Poland, has struggled to shed its ex-communist yoke. Like other parts of the eastern region, the city has been losing population.

Once home to 87,000 inhabitants, a quarter-century later only 58,000 people are left as many have moved west in search of better opportunities. The unemployment rate stands at 10 per cent, far above the 5.9 per cent rate nationwide.

And even if foreigners make up just over one percent of the city’s population, some 1,400 people – half of them asylum seekers who arrived in 2015 – many locals still feel that’s too many.

A retiree, who spoke on condition of anonymity, said: “I don’t think refugees should have been allowed in like that. Even if we are a social country, we have our own problems.”

“I am not xenophobic, but that was far too many.”

Her sentiment is mirrored across much of Germany’s five states in the former communist east, where the number of jobless is higher than the western average and where few migrants are seen on the streets.

Even in 2015 – when the mass migrant influx brought the total number of foreigners in Germany to 9.1 million – only 476,000 made their home in the east, according to official data.

The former East Germany “was an authoritarian regime that was not very open to diversity and which did not seek to integrate foreigners,” he said.

Following reunification in 1990, resentment also built up over the economic gap with western Germany as new prosperity failed to materialise quickly enough, he said.

EU nations must not to refuse Muslim migrants: Merkel

More recently, the anti-Islam PEGIDA movement was born in the biggest city in the east, Dresden, and the proportion of assaults against shelters for asylum seekers has been far higher than in the west. The neo-Nazi party NPD also has some 264 elected municipal officials in the east, compared with 74 in the west.

Funke noted that the Rostock riots became a template of violence for a generation that grew up during the turbulent reunification years, and became drawn to the extremist movement.

But the AfD’s Moeller rejects any racist view of east Germans, saying it is disillusionment that has pushed them to the right.

Reflecting its voter base, Moeller’s AfD office is located not in the town centre, but in the working class district of Neuberesinchen, where Gerd, 61, lives.

Smoking a cigar at the foot of a decrepit building with peeling paint, Gerd, who is a far-left Linke party voter, nevertheless defended the AfD.

Thomas Klaehn, who works with a migrant aid group, believes that those who deny they are racist while rejecting migrants “often have had no contact with refugees”.

“But if someone manages to put them in contact and build a positive relationship, then they could be brought over to the side of 30 percent who are for them.”.