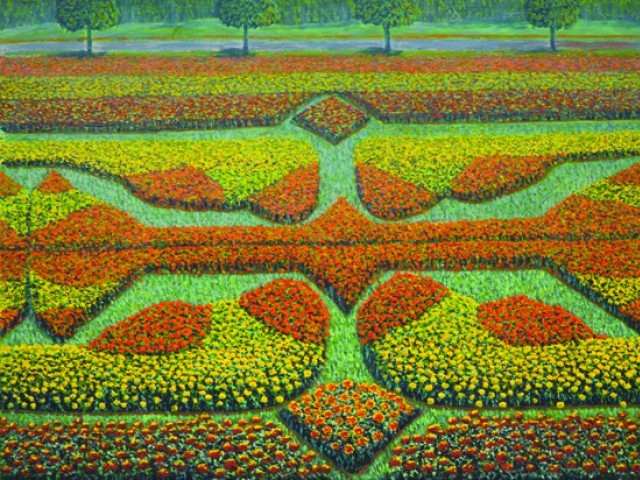 Artist Shahid Jalal learned how to develop the aesthetics of painting from his teacher and mentor, Khalid Iqbal. Photos: Courtesy Artscene Gallery

KARACHI: In Lahore, it is a tradition to have flowerbeds along Canal Road and other main roads to give the city a fresh look, said artist Shahid Jalal at the opening of his painting exhibition, ‘Flower Carpets of Lahore’, at Artscene Gallery.

A chartered accountant by profession, Jalal said he took an early retirement at 55 years of age to pursue art. Using the medium of oil on canvas, Jalal paints marigolds and chrysanthemums, giving them a touch of class.

Comparing the art galleries of Karachi to those of Lahore, the artist said the galleries in Karachi are smaller, structure-wise, and people in Karachi get involved in buying pieces of art, while in Lahore, it becomes a problem to get people to visit galleries. However, if there are people coming in to galleries in Lahore they almost always buy art, he said.

Referring to his previous profession as ‘another world’, Jalal shared that his wife, author Saadat Manto’s daughter, helped him pave his way and continue as an artist. “Had it not been for her, I would have remained a Sunday painter!” he said.

“These drawings you see on large canvases represent acres and acres of land in Lahore with flowerbeds, of which some lands had flowers so far off that the naked eye could not wander any further,” said Jalal, adding that he would climb atop a ladder, sketch the flowers and take the sketches to his studio to paint.

“All of this gets entwined as a complex composition in the final outcome,” he said.

Speaking about his teacher and mentor, Khalid Iqbal, Jalal explained that even though Iqbal did not teach him how to paint, he taught him how to develop the aesthetics of painting.

“He [Iqbal] would never allow me to see his creations so I wouldn’t come under their influence,” Jalal remembered.

“Since I was eight-years-old, I have only painted flowers. Of course, when one sees the mountains, they exclaim, why not stand atop them?” he said.

Jalal believed that it was the flowers that create an essence and leave an impact. “Punjab’s landscape has no colour of its own but for the gardens of Lahore,” he said.

The show continues till tomorrow (March 22).