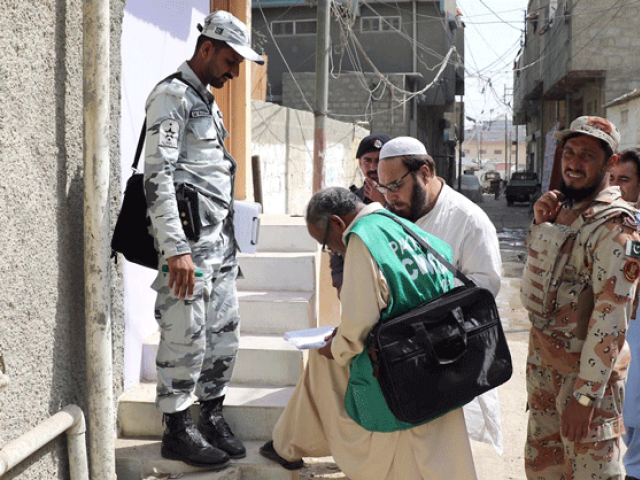 An enumerator collects data in Karachi on the last day of the house count as part of the first phase of the sixth population census on Friday. The population count begins today. PHOTO: ONLINE

KARACHI: As the first phase of house count concluded on Friday amid confusion and rampant complaints, the census authorities claimed that the remaining half of Karachi houses will be listed in the next phase, which will start from March 30.

A number of complaints had poured on from citizens that their houses were left uncounted and that they had been excluded from the house count exercise. To this, officials in the Pakistan Bureau of Statistics (PBS) clarified that the entire exercise will be completed in two phases across Sindh. Those houses that have not been counted in the initial three days will be tallied by the census team in the next phase of house count.

“People should have patience. All will be counted,” Habibullah Khan, a member of Census and Survey, Bureau of Statistics, Islamabad, told The Express Tribune. Talking about the plan, he further said that they have successfully conducted the three-day house count in various districts of Sindh from March 15.

He added that they will begin the population count today (Saturday) and will get all the information relating to family members. “This will continue for 11 days, he said. “After that, we will resume the second phase of house and population count to cover all the remaining blocks in another 14-day exercise.”

The first phase of census started in Karachi, Hyderabad and Ghotki district. A large number of people expressed concern over the census process. “I have been waiting for three days but no one has showed up to count my house as yet,” said Nazir Memon, a resident of Memon Goth, Malir, adding that census staff have covered the streets in front of his house but the lane in which his house is located remains uncounted so far.

According to Khuda Dino Shah, a social activist and former nazim of Bin Qasim Town, around 30% to 40% blocks in Khokhrapar, Ibrahim Hyderi and Rehri areas of Malir have not been counted.

Similar complaints came from Federal B Area, Gulshan-e-Iqbal, Korangi, Defence Housing Authority (DHA) and Clifton areas, where people were confused about the process. “Earlier, we were told that three days will only be for house count,” said Dr Faisal Nadir, who lives in DHA Phase II. “Now, they are talking about another phase to be started soon. We are really confused.”

The discrepancies on part of the census staff not only added to the ire and confusion of the denizens – higher authorities, including the chief minister and chief census commissioner, also took notice of filling the forms in pencil and counting high-rise buildings as a single house.

Despite this, the census staff continued with the practice of using pencil. “Even on the last day, an enumerator filled the form in pencil,” said an enraged citizen of Korangi while talking to media. “I insisted but he did not listen to me.”

Meanwhile, population count is beginning today. The big challenge for census staff will be the one day that has been fixed for listing the ‘homeless people’. According to census experts, one day for the homeless count is not sufficient.

However, West Assistant Census Commissioner Zafar Ahmed Jan believes the homeless can easily be covered in a day. “Homeless mean the beggar or addicts living on footpaths, in parks and under the bridges and flyovers. Each team in a block can trace them without any trouble.”

Meanwhile, census authorities said that during the population count, in multi-storey buildings, the enumerators will check and count separate families if there are separate kitchens.

Farooq Sattar wants house count to be extended in Karachi