Profes­sor Robert Kelly was speaki­ng on the issue of South Korean politi­cs when his kids interr­upted
By News Desk
Published: March 11, 2017
Tweet Email 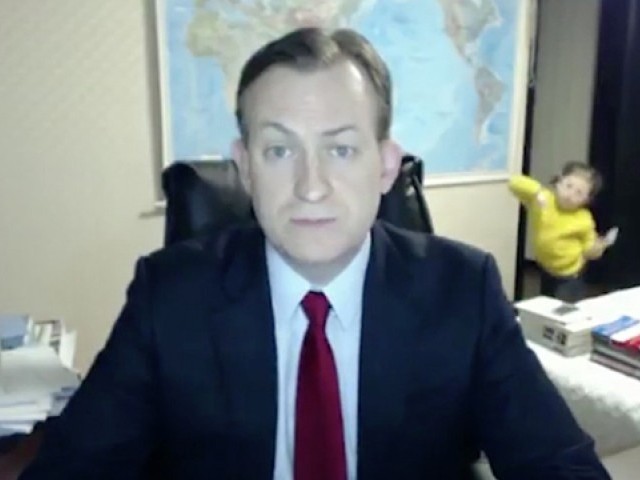 A hilarious video of kids crashing their father’s BBC interview has gone viral.

In a BBC interview, Professor Robert Kelly was speaking to the channel via Skype on the issue of South Korean politics. As he answered the question, a young girl wearing glasses could be seen strutting into the room.

The moderator pointed out to the professor that one of his children had walked into the room. As Professor Kelly tried to push his child out from the camera frame, the younger sibling tottered into the room in a baby walker.

The professor was left apologising multiple times as a woman frantically rushed into the room to grab the children and close the door of the professor’s office.

The 42-second video immediately went viral on the Internet and has BEEN viewed over 10 million times.

Replying to a query on Twitter, Professor Kelly asked if this is the “kinda thing that goes viral and gets weird”

@David_Waddell What would that mean, please? Re-broadcasting it on BBC TV, or just here on Twitter? Is this kinda thing that goes 'viral' and gets weird?

The video has left everyone giggling, some declaring it as the funniest thing in a long time:

That viral BBC video of the professor's kids entering the shot is the best thing to happen on the internet in a long time.

Without a doubt the funniest thing the BBC has ever broadcast!!! https://t.co/UThYr7MQQn

Too funny not to share. I love how Prof @Robert_E_Kelly asks BBC "Is this the kinda thing that goes viral?" Lol. Yes it is. #workingfromhome https://t.co/rSWMHzgWyq

A BBC spokesperson later said that they were “really grateful to Professor Kelly for his professionalism.”

The viral video can be seen below: