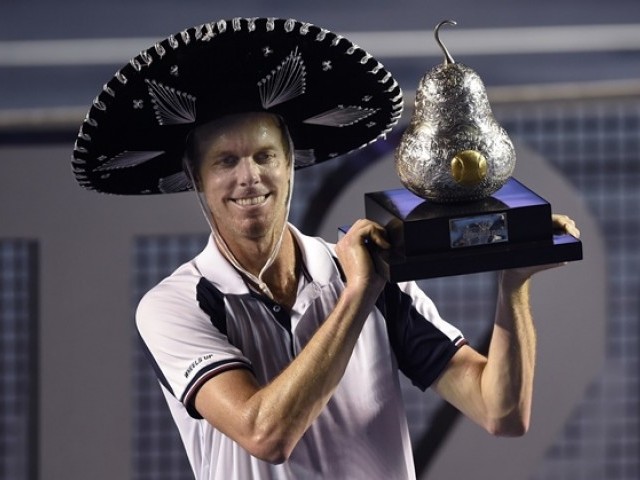 Sam Querrey of the US celebrates with the trophy after beating Rafael Nadal of Spain 6-3, 7-6 (7/3) in the ATP men's singles finals of the Mexican Tennis Open in Acapulco, Guerrero State, Mexico, on March 4, 2017. PHOTO: AFP

Querrey, ranked 40th in the world, fired 19 aces, backed up by powerful, precise groundstrokes, en route to his first career victory over Nadal in five meetings.

“I’m ecstatic,” Querrey said. “To do it against Rafa makes it even a little sweeter.”

He’s projected to return to the top 30 in the world rankings on Monday.

“It’s definitely a tournament that I’m going to remember for the rest of my life,” Querrey said. “It’s just one of those weeks where I got in the zone and everything was working for me. I hope I can have more like this.

“After the match against Goffin, I knew I could go far here if I continued to play at that level,” he added.

“My forehand and backhand were great and my serve bailed me out of trouble when I needed it.”

Nadal, playing his first tournament since falling to Roger Federer in five sets in the Australian Open final, was denied his first hard court title since Doha in 2014.

Federer shocked by qualifier in Dubai

Querrey surrendered just four points on his serve in the opening set and he broke Nadal at love to seize a 5-3 advantage.

He served it out comfortably, firing a forehand winner on his second set point after just half an hour.

Nadal made more inroads in the second set, but couldn’t convert any of his six break chances.

That included five in the eighth game — three of which Querrey neutralized with aces.

They went on serve to the tiebreaker, where Nadal faltered first.

A brace of baseline errors from Nadal gave Querrey a 6-3 lead and a chance to serve for the title, with Nadal sending a forehand long on the American’s first match point.

“He played very well, almost reaching perfection,” Nadal said. “I played under a lot of pressure because of his serve and baseline game. He left me with very few options, and the few I had he also played good.”