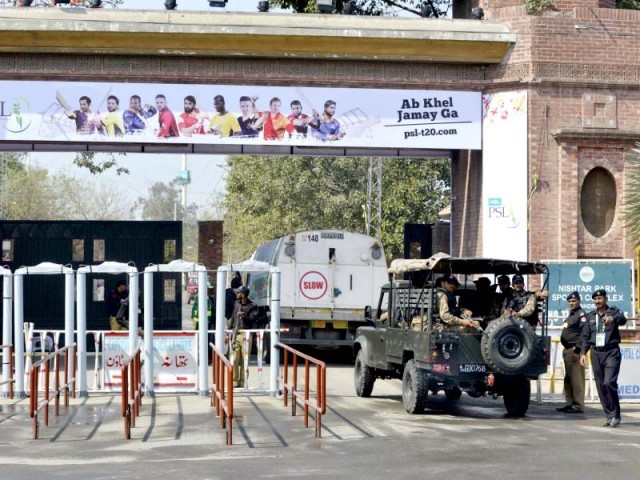 Soldiers patrol outside the Gaddafi Stadium ahead of the PSL final. PHOTO: AFP

LAHORE: The long, frenzied wait punctuated by hope and despair is over. Cricket fever is running high. Lahore is all set to play host to the final of Pakistan Super League (PSL), the country’s answer to the glitzy Indian Premier League and Australia’s Big Bash League.

Frenzied fans, clad in the colours of their favourite teams, have travelled from all over the country to root for their sides in Sunday’s sold-out match between Peshawar Zalmi and Quetta Gladiators, the culmination of the Twenty20 tournament which has otherwise been played in the UAE.

Lahore wears a festive look. Excitement is in the air. The main arteries are festooned with colourful bunting and banners welcoming the cricketers. And the main road leading to Gaddafi Stadium is lined up with spruced-up seasonal plants.

Army chief assures all out cooperation for PSL final

The 27,000-capacity stadium, designed by Russia-born Pakistani architect and engineer Nasreddin Murat-Khan, has been aesthetically decorated by the sponsors of the country’s biggest cricket match in years. On Saturday, paratroopers from army’s Special Services Group exhibited their acrobatics over the ground.

The army, paramilitary Rangers and Punjab police will secure the area and players will travel in bullet-proof buses, in what officials say are unheard-of levels of security. The ‘unprecedented’ security arrangements are meant to restore the confidence of international cricketers which had been badly shaken by a brazen terrorist assault on Sri Lanka’s team in 2009 — also in Lahore.

Five layers of security have been established at Gaddafi Stadium, which has been literally sealed off with shipping containers, barriers and barbed wires. Rescue 1122 has deployed 300 emergency medical technicians, firefighters and rescuers, 21 ambulances, 12 fire vehicles and four rescue vans.

The federal government has also handed over a helicopter for aerial surveillance, while drone-mounted cameras have been banned in the city for the day.

In a meeting with Interior Minister Chaudhry Nisar on Saturday, Chief Minister Shehbaz Sharif dismissed the claims of the opposition parties that 60,000 law enforcers have been deployed for the final. “About 10,000 law enforcers will provide security,” he said.

The Punjab government has been accused of ‘racial profiling’ of ethnic Pakhtuns in the aftermath of last month’s suicide bombing outside the Punjab Assembly. In order to dispel this impression, the chief minister ordered deployment of Pashtu-speaking police officers around the stadium to facilitate the fans, who have come from Balochistan and Khyber-Pakhtunkhwa.

Holding the final in Pakistan has drawn criticism from some quarters. “God forbid if any mishap happens we can say goodbye to int (international) cricket in Pak for the next decade,” tweeted crickter-turned-politician Imran Khan.

England’s Kevin Pietersen, Luke Wright and Tymal Mills have all withdrawn, along with their Quetta team-mates Rilee Rossouw of South Africa and New Zealand’s Nathan McCullum.

“I have a young family… a game of cricket is just not worth the risk,” tweeted Wright, adding that “all overseas players” had a clause in their contract exempting them from the final.

Peshawar’s owners meanwhile have claimed all five of their foreign stars — Darren Sammy and Marlon Samnuels from the West Indies, and England’s Chris Jordan, Samit Patel and Dawid Malan are ready to go to Lahore, though the players themselves have not confirmed this.

Both teams will be able to pick from a specially created pool of 12 foreign players willing to participate, Cricinfo reported on Friday. However, Quetta Gladiators skipper Sarfraz Ahmed believes it is the local players that need to step up to the ante in front of a vociferous Lahore crowd.

“The local players for both sides may well be the ones who decide the game,” he said. “The people in Lahore will be eager to see which players can perform for the national side as well, so it’s a great chance for the youngsters to shine.”

Sunday’s game stands as a test as to whether Pakistan can again successfully host top-level cricket, and has also been held up as a symbol of defiance in the face of terrorist violence.

It will be the highest-level game in Pakistan since the 2009 assault, in which gunmen attacked the Sri Lankan team bus outside Gaddafi Stadium, killing six people and wounding several players.

A marked improvement in security since 2014, coupled with the success of the inaugural PSL, convinced the Pakistan Cricket Board to stage the final in Lahore – before last month’s attacks set nerves on edge once more.

“The success of the PSL will open the gates for teams to start coming into Pakistan,” insisted PCB Chairman Shaharyar Khan, as the three-and-a-half-week tournament began last month.

Fans queuing for tickets in Lahore Friday were excited about the revival of cricket in Pakistan. “It’s a sign of international cricket’s revival in our country,” said fan Uzair Ahmad.

Cricketers are happy to see the euphoria created by the match. “It is amazing to see such excitement in the people of Pakistan for the final,” said Peshawar Zalmi’s wicketkeeper-batsman Kamran Akmal. “We were lucky to make it to the final and this can be a great step towards the revival of international cricket in Pakistan.”

He hoped a successful final would pave the way for more matches at home in next year’s edition. “This year the final has come to Pakistan, hopefully the next year the entire PSL can be held here,” he said.

Notwithstanding excitement and optimism, negative perceptions will remain “if you need 7,000 cops to secure 25,000 attendees”, said political commentator Fasi Zaka. “It’s risk-averse international players and boards that need to be convinced, and they are reacting to the general security situation.” But he added that “every sliver of normalcy counts”.

We stand united behind cricket: Marriyum