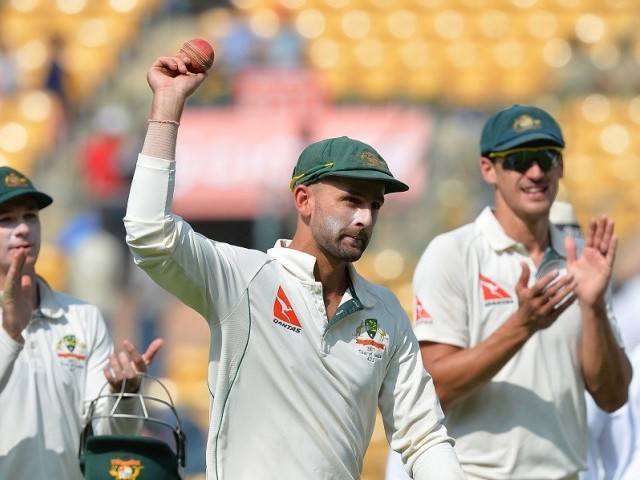 Nathan Lyon shows the ball as his teammates applaud after his eight-wicket haul. PHOTO: AFP

BANGALORE: Off-spinner Nathan Lyon claimed a career-best haul of eight wickets to help Australia bowl out India for a paltry 189 and take opening day honours in the second Test in Bangalore on Saturday.

Lyon, whose figures of 8-50 became the best by a visiting bowler on Indian soil, wreaked havoc in the final session of play as India lost their last five batsmen for 15 runs.

Australia were 40 for no loss at stumps with openers David Warner (23) and Matt Renshaw (15) at the crease. The visitors trail India by 149 runs in the first innings.

Lyon though easily remained the star of the day, eclipsing former South African pacer Lance Klusner’s show of 8-64 at Kolkata in 1996.

The 29-year-old Lyon, who bettered his previous best of 7-94 against India in Delhi in 2013, once again beat the hosts at their own game of spin.

The hosts were bowled out for 105 and 107 during their opening loss in Pune last week, conceding a 1-0 lead to Australia in the four-match series.

But the pitch in Bangalore, which has an average first innings score of 451 in the last seven Tests, seemed to offer no demons like the turning track in Pune that was rated poor by the match referee.

Lyon struck shortly after lunch to get India skipper Virat Kohli trapped lbw for 12, as the batsman once again offered no shot to an Australian spinner. He was bowled by left-arm spinner Steve O’Keefe in the first Test.

Kohli, who had a rare flop in Pune with scores of 0 and 13, faltered after choosing to pad up Lyon’s off-spin that headed straight onto the stumps and was adjudged lbw.

Rahul, who has survived two dropped catches on 30 and 61 at his home venue, did grind his way against the Aussie attack but got little support from the other end.

Rahul, who recorded his third Test fifty in his 15th match, finally was out to Lyon. The batsman injured his shoulder during an ugly slog against Steve O’Keefe in the latter part of his innings.

Rahul’s 61-run second wicket stand with Cheteshwar Pujara (17) seemed to be the only bit of resistance in the Indian batting. Karun Nair also contributed with 26.

Earlier pacemen Starc, who got opener Abhinav Mukund for nought, and Josh Hazlewood bowled probing spells to rattle the Indian batting early in the day.