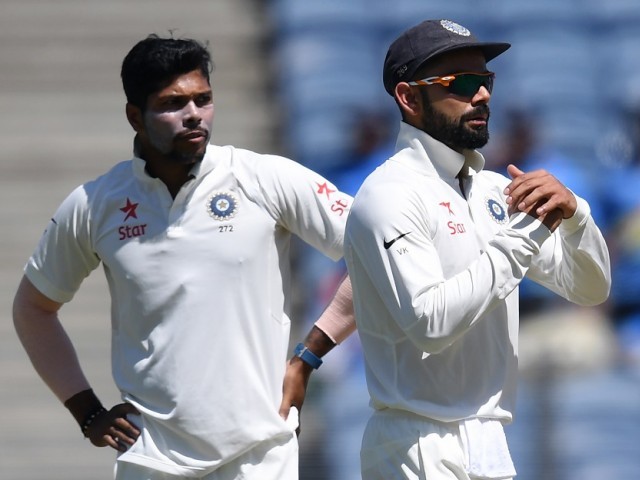 Umesh Yadav (L) looks on as captain Virat Kohli asks for a review of a LBW decision in Pune on February 23, 2017. PHOTO: AFP

BANGALORE: Sachin Tendulkar expects India to hit back hard in the second Test against Australia beginning on Saturday in Bangalore after their shock defeat in the opening encounter.

Australia’s crushing 333-run win in the first Test in Pune last weekend was the tourists’ first victory in India since 2004 and ended a 19-match unbeaten run for Virat Kohli’s world number one team.

India’s much-vaunted batting line-up was skittled out for just 105 and 107, and their spinners, supposedly the best in the world, were upstaged by their unfancied Australian counterparts.

But while the result silenced predictions of another Indian whitewash against the Australians, batting legend Tendulkar is convinced the hosts will put it behind them by the time the second Test starts.

“It was a tough Test match for us but it is part and parcel of the game … Knowing the spirit of the Indian team I know that they will fight back hard,” said Tendulkar, who is Test cricket’s record run-scorer.

“There are good moments and there are tough moments, but it is all about how you stand back on your feet again and start competing. That is what makes the sport interesting.”

Confidence had been sky high in the home camp going into the four-match series after setting an Indian record of 19 Tests unbeaten.

But the outcome of the first Test means they must now avoid defeat in Bangalore if they are reclaim the Border-Gavaskar trophy which has been in Australia’s possession since they beat India 2-0 at home in 2014-15.

Much will depend on whether skipper Kohli, who had a match to forget with scores of 0 and 13, can rediscover the form which has brought him four double centuries since last July.

But the team will also need their main spinners Ravichandran Ashwin and Ravindra Jadeja to fire after their relatively disappointing performances in Pune.

Ashwin, the world’s top-ranked bowler, did take seven wickets in the match but conceded 182 runs while Australia’s Steve O’Keefe took 12 for 70 in only his fifth Test.

The sharply-turning Pune pitch should have played to India’s strengths, and a concern for Kohli must be that the strip in Bangalore should be more to the liking of Australia’s pace attack led by left-armer Mitchell Starc.

“If it’s not going to spin as much in Bangalore, we’re going to have to make sure we’re using that reverse swing,” said Starc, who is on a high after bowling Kohli for a duck in Pune.

“We’ve got a great chance in Bangalore to go 2-0 up and make sure we retain that trophy.

“We need to keep improving. Try and create a few more collapses in the Indian line-up but we know it’s going to be a better wicket in Bangalore,” added Starc.

While India are expected to make a couple of changes for Bangalore, the visitors are likely to stick with their winning side.

The third and fourth Tests of the series will be in Ranchi and Dharamsala.

Federer shocked by qualifier in Dubai