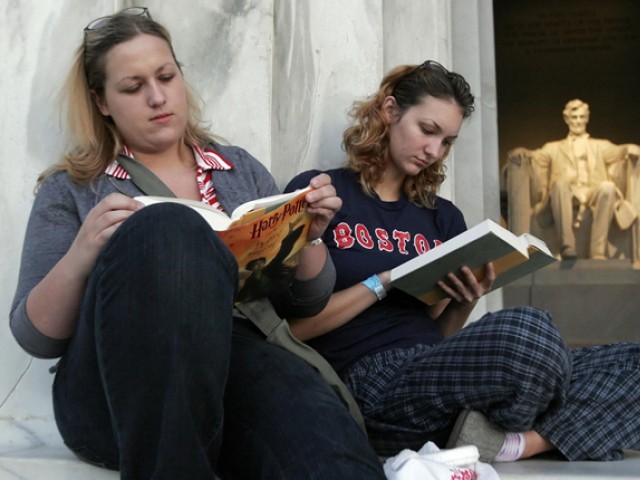 According to statistics, the average American reads 200–400 words per minute. PHOTO: AFP

A blogpost by Charles Chu outlines how simple it is to read 200 books a year.

He starts off with a Warren Buffet quote. When asked about his secret to success, Buffet pointed to a stack of books and said, “Read 500 pages like this every day. That’s how knowledge works. It builds up, like compound interest. All of you can do it, but I guarantee not many of you will…”

500 pages may sound like a lot, and for most of us with our seemingly busy lives, it is. But Chu decided to take Buffet’s advice and soon realised it’s actually pretty simple.

While he didn’t get to 500 pages a day, he did read over 400 books in two years. His new habit also led him to find the courage to travel, the conviction to quit his job, and give him meaning in the world.

For the average Joe, 200 books a year may seem like too much, but Chu breaks it down to tell us it’s actually not that difficult.

1. Do not quit before you start

Chu says one can’t simply quit because they think the feat is impossible. Simple math shows us it is achievable, so the can-do mindset is extremely important.

According to statistics, the average American reads 200–400 words per minute. Moreover, a typical non-fiction book has approximately 50,000 words.

417 hours may seem like quite a lot but is it really?

On an average, an American spends 608 hours on social media and 1642 hours watching TV annually. That’s a combined total of 2250 hours.

Instead of wasting time watching mindless reality TV shows or stalking celebrities on Twitter, one could spend their time reading.

Of course, the theory is simple but how does one execute?

The first is to create an environment that makes you be able to read easily. Removing distractions from your space, plus making books easy to access will mean you are more likely to pick up a book and read. Downloading reading apps on your smartphones will mean you carry a book with you everywhere.

The second is to create a fortress of habits. Simple willpower won’t help change your lifestyle. The point it to build tiny habits that help you become your best possible self.

The third is to not be too picky about how you read, as long as you’re reading. A paperback, an app in a phone or an audio book – make it easy for you to read anywhere you are.

Chu ends by saying that his habit of reading changed his life. If you are looking for answers in life, picking up this habit may lead you to those answers and much more.