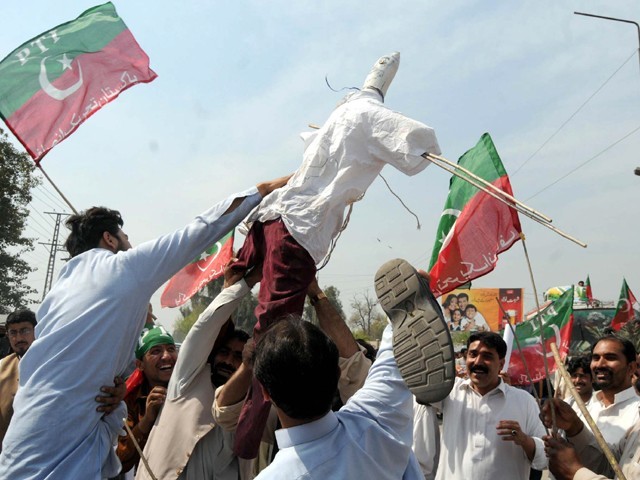 Rallies against the release of Raymond Davis held across the city. PHOTO: PPI

Political parties, religious groups and student organisations staged demonstrations at various venues of Peshawar on Thursday to protest against the release of CIA contractor Raymond Davis.

Police resorted to baton-charging and tear gassing protestors at University of Peshawar campus, arresting at-least eight students. However, they were freed later in the evening. The students had planned to march to Peshawar Press Club.

JI arranged a rally in the evening that began at Hashtnagri Chowk and ended at Ashraf Road, where party leaders addressed the participants. The rally was led by the party’s senior leaders Sirajul Haq, Shabbir Ahmed Khan and Professor Ibrahim Khan. Haq opined in his speech that the masses would not tolerate the government’s handling of the issue and would revolt against them. He lambasted Nawaz Sharif and President Asif Zardari for “jointly betraying the nation.”

Members of the party’s student wing (IJT) also held a rally from Hashtnagri to Findus Chowk, where they burned tyres and blockaded the Grand Trunk Road, causing inconvenience to travelers.

IJT’s Khyber-Pakhtunkhwa (KP) Nazim of Abd-ush-Shakoor and Campus Nazim Sohaibuddin led the protesting students. “It is a shame for the rulers and us that America got her citizen released by force,” they said in their addresses.

Condemning the release of Davis, PTI provincial secretary Farman claimed that the slain’s family members “had been compelled to pardon the killer by accepting blood money (Diyat).” He said that the rulers had humiliated the country by releasing Davis and alleged that the American “was not only involved in the assassination of two Pakistanis but also in other subversive activities.”