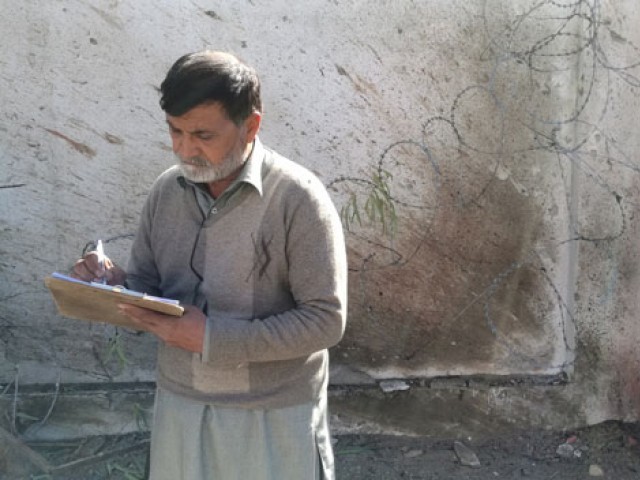 An officer takes notes outside a courthouse after an attack by suicide bombers in Charsadda on February 21. PHOTO: Reuters

PESHAWAR: Khyber-Pakhtunkhwa’s Inspector General of Police Nasir Khan Durrani on Wednesday claimed that the suicide bombers who tried to storm the tehsil courts and secretariat in Tangi had come from Afghanistan through Mohmand Agency.

He was speaking following the arrest of three facilitators of the attack.

Seven people were killed and 22 others injured in a clash between police and the bombers on Tuesday in the attack claimed by the outlawed Jamaatul Ahrar, a breakaway faction of the banned Tehreek-e-Taliban Pakistan.

There was a 20-minute firefight at the gates to the courthouse complex in which the suicide bombers reportedly lobbed hand grenades and opened fire in an effort to force their way into the court premises.

They were kept back by police guards on duty and were eventually killed — two by their own explosives belts and the third by police.

Talking to media outside the Lady Reading Hospital, IGP Durrani stated that the suicide bombers entered Charsadda from Afghanistan via Mohmand Agency and added that the Charsadda police had arrested four terrorists with suicide jackets and police uniforms while another terrorist had been killed in an encounter last week.

He also disclosed that the facilitators of the court attack had been identified and would soon be brought to justice.

In response to a question, Durrani said that the K-P police had the spirit to fight back and was capable of overcoming any hurdles effectively, which they had demonstrated time and again.

He claimed that the police force was fully alert to foil the nefarious designs of the terrorists and stressed the need for strict checking along the Pak-Afghan border.

Terming the China-Pakistan Economic Corridor a game changer for the economy, he vowed to foil the conspiracies of the enemy against the state.

New wave of terror: Why are we still fighting?

The IGP appreciated the achievements of Zarb-e-Azab operation in the tribal areas and K-P police’s performance in the settled areas against the terrorists.

The IGP appreciated the valour and bravery exhibited by the police officers. He enquired after the health of police personnel and civilians injured in Tuesday’s terrorist attack. He also said that the provincial government would be approached for special bravery award for the police personnel who laid down their lives.

Security forces claimed to have arrested three facilitators of the suicide bombers.

The facilitators have been arrested from an adjacent area of the Tangi tehsil and shifted to some undisclosed location for interrogation.

A police source, while confirming the arrests, told The Express Tribune: “The bombers stayed in the locality for over three days and were hosted by the three suspects.”

Meanwhile, the Khyber-Pakhtunkhwa home department and police have sent body parts of the suicide bombers for identification to Lahore, a senior police officer told The Express Tribune.

Also, the district education officer has declared a holiday in all educational institutions in the tehsil, while lawyers have announced 10 days of mourning over the attack on the legal fraternity.

Pakistan has been hit by a wave of suicide bomb attacks claimed by various militant groups in recent days.

In response, the government launched a security crackdown — which included closing border crossings with Afghanistan — and claims it killed 100 militants.