Plan of action: Don’t miss out on these upcoming events in your city!

For Maysaloun Hamoud, the real shock of her film &quot;Bar Bahar&quot;, which opened last month in Israel, has been the controversy it whipped up, even death threats on social media. PHOTO: AFP

The culture clash in Bar Bahar starts off when Nur, a veiled and conservative Muslim, moves into a flat with two other Arab Israeli women and sees their drug-taking, party-going lives.

But for its director, the real shock of the film, which opened last month in Israel, has been the controversy it has whipped up, even death threats on social media.


In its two hours, the Galilee-born filmmaker, 35, tackles almost all the taboos of Arab Israeli society: drugs, alcohol, homosexuality.

Salma is rejected by her Christian family for being a lesbian, while Leila leaves her boyfriend when she discovers he is more conservative than he claims.

But above all, there is the story of Nur, a native of the conservative city of Umm al Fahm - a stronghold of the Islamic Movement, close to the ideology of the Muslim Brotherhood.

Conservative, and initially shocked by the attitude of her roommates, Nur and the other two become friends and allies.

She ultimately rebels against her family and traditions by leaving her religious fiancé Wissam after he rapes her, a scene shown on screen. 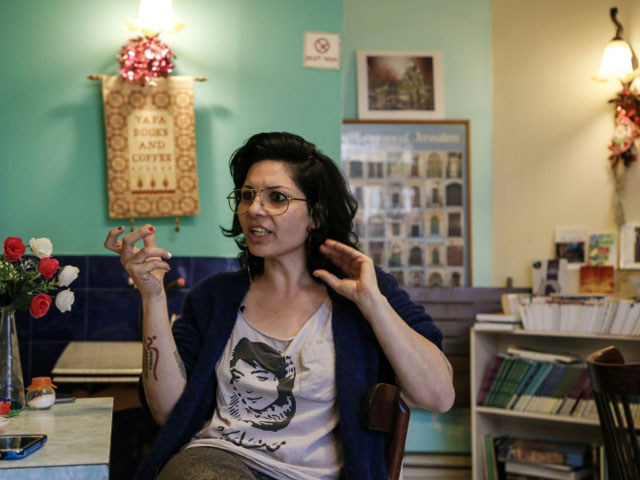 
The film has already been released in the United States, under the title In Between, and it won three prizes at the San Sebastian Film Festival in Spain last year.

US magazine Variety called it a "compelling" drama and The Hollywood Reporter trumpeted it as a "sparkling, taboo-breaking first feature".

The film company has not released ticket sale numbers but Hamoud said there had been a lot of feedback, mostly positive but some less so.


The response from Umm al Fahm has been particularly sharp.

The municipality issued a statement condemning the film as being "without the slightest element of truth" and barring it from being screened there.

They insisted, however, that they were happy to support "meaningful" art, but did not reply to a request for an interview.

Hamoud as well as her actresses have received death threats.

"Those who speak ill of Umm al Fahm dig their own grave," said one. "You need a bullet in the head and another in the heart," a second read, Hamoud said.

"For me as an artist, a director and a screenwriter who is a part of this society, it is my right to tackle any issue I feel is important enough for me to talk about," Hamoud said in a cafe near where she lives in Jaffa, a predominantly Arab district of Tel Aviv.

"For the audience, if they want to see it they are welcome and I will be very happy. But if you don't want to, don't go," she added.

Her face is framed by short black hair and she has tattooed arms, including one with the title of the film in the colours of the Palestinian flag.

Her film, she said, brings to the screen issues usually "hidden" among Arab Israelis, such as lustful, youthful evenings where cannabis smoke billows among dancers.

Bar Bahar, literally meaning "land and sea" in Arabic, translates as "neither here, nor there" in Hebrew.

For its director it aims to be "the voice of a generation" of young Arab Israelis who feel trapped between cultures.

Making up around 18% of Israel's population, the 1.4 million Arab Israelis are descended from Palestinians who remained on their land after Israel was established in 1948.

Many identify as Palestinian but feel torn between identities - saying they experience discrimination and racism living and working in major Israeli cities.

"I'm not exaggerating, every scene is realistic," Hammoud insisted.

Getting help shouldn’t be taboo

Hamoud chose to set the film in Tel Aviv, regarded the most tolerant and liberal city in Israel, to make a point that even there racism against Arabs is prevalent.

She wanted to show the girls' "otherness" in the city.

"They discover that no matter how far they go from their towns and the traditions they came from, they are shocked that the place where they are [Tel Aviv] doesn’t accept them."

Hamoud wants to make films that help society "face its contradictions in order to move forward".

"No one should feel good after the movie, neither Israelis nor Palestinians in this society."

Bunny Rabbit | 5 years ago | Reply Wow brave indeed. now , I can only Hope that he stays safe .
Replying to X
Saved ! Your comment will be displayed after the approval.
Error !
Error! Invalid Email.