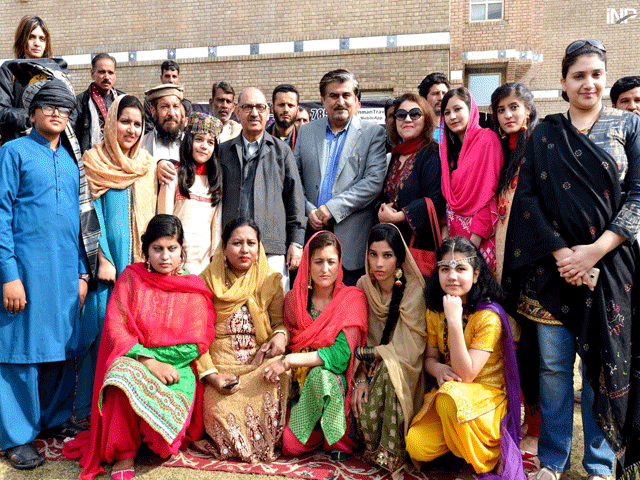 Irfan Siddiqui, Adviser to Prime Minister on National History and Literary Heritage in a group photo with students and artisans after the inauguration of three-day “Heritage Fest Mela Yaraan” at PNCA. PHOTO: INP

ISLAMABAD: The ‘Mela Yaraan’ – a three-day heritage festival – kicked off at the Pakistan National Council of Arts (PNCA) on Friday.

The festival features cultural groups from all over Pakistan who are exhibiting their handicrafts, folk dances and music. The pavilions also reflect the life styles of different regions in addition to ethnic cuisines.

Irfan Siddique, adviser to PM on national history and literary heritage, condemned the recent terrorist attacks as he inaugurated the festival would continue till Sunday.

He added that the people have rejected fear imposed by terrorists  through their determination and resilience.

PNCA DG Jamal Shah, while condemning the attack on the shrine of Lal Shahbaz Qalandar, said that the area now comprising Pakistan has over 9,000 year old history. He added that the onslaught of terrorism and radicalism can be defeated by establishing a cultural narrative of peace and harmony. Sakafat Director Momina Khayal stressed the need to revitalise cultural and creative industries.