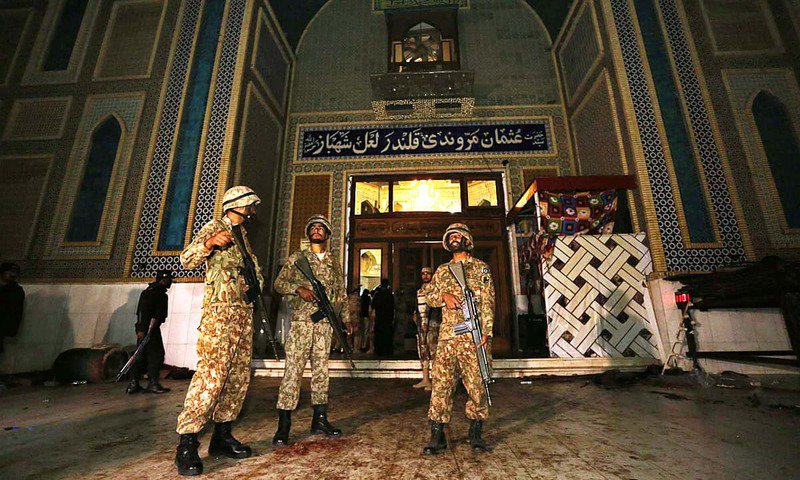 The country was devastated on Friday as a deadly blast ripped through Lal Shahbaz Qalandar’s shrine at Sehwan killing at least 72, including 20 children.

The shrine of Pakistan’s most venerated saints which echoed with dhamaal was marred by blood and cries for help.  The deadliest attack in Pakistan in more than two years, which came after a series of bloody assaults this week, undermined the growing sense of optimism in the country.

Several took to Twitter to vent their anger at the failure of the national government to keep people safe. Sindh’s ruling party, PPP, was also slammed for not being adequately equipped to deal with a disaster of this magnitude.

#sehwan My heart is bleeding for victims and anger is high for Govt.'s inability. Mere condemnation statements don't work any more. 2/2

Super sad about #Sehwan
Its too much now. Too much to even write, cry, whine. Nothing helps. What does? #numb #confused

Some questioned why there were no hospitals in the area:

Injured of Sehwan Sharif taken to Nawabshah 94KM & Hyderabad 149KM away. MashAllah flight from Dubai to Khi would arrive sooner

Last night, Sindh's CM admitted there were no medical facilities in #Sehwan. Yes that is all he had to say.https://t.co/6gYLIaWXl7

Did india or afghanistan tell us to not build hospitals to deal with this type of situation? #Sehwan

Population of #sehwan above 120,000 ,only 4 doctors for the district speaks loud and clear that #ppp has done nothing except mega corruption

Unfortunate that we refuse to learn. The attack on #ShahNoorani should have resulted in better security and relief facilities at #Sehwan

No beds, no medicines, no paramedics. The operation theatre is not functional.
But don't worry, Bhutto zinda hai. #Sehwan

There is no any mega hospital in #Sehwan, nearest hospital is district hospital #Dadu but it has no basic facilities #LalShahbazQalandar

While some offered words of encouragement and resilience:

It is a time for everyone to be united, #Pakistan is under attack. We will not bow down, stay strong and safe everyone. #Sehwan

Thoughts & Prayers for the innocent victims & #Sehwan – the symbol of peace & tolerance in our Sindh. pic.twitter.com/s134yYEBFJ

Thoughts & Prayers for the innocent victims & #Sehwan – the symbol of peace & tolerance in our Sindh. pic.twitter.com/s134yYEBFJ

Heartbroken over attack in Sehwan. These attacks test the resilience of our nation but we will never be deterred from fighting back.#Sehwan

The recent tragedy once again testing the resilience of the nation. We need to stay strong. We will prevail. #Sehwan

The PPP government and party supporters responded to critics as they blamed security agencies and civilian government for not eradicating terrorism in the country:

What happened 2 our #NAP where r our security agencies #Pakistan attacked on a daily basis r we all sitting ducks against terrorist attacks? https://t.co/ZWqF1e8E72

We wouldn't have had to lose people everyday to ths fresh wave of terrorism if NAP was used agnst terrorists instead of political opponents!

Where Is National Action Plan?????#SewhanSharif

The Islamic State group (IS) claimed the attack.