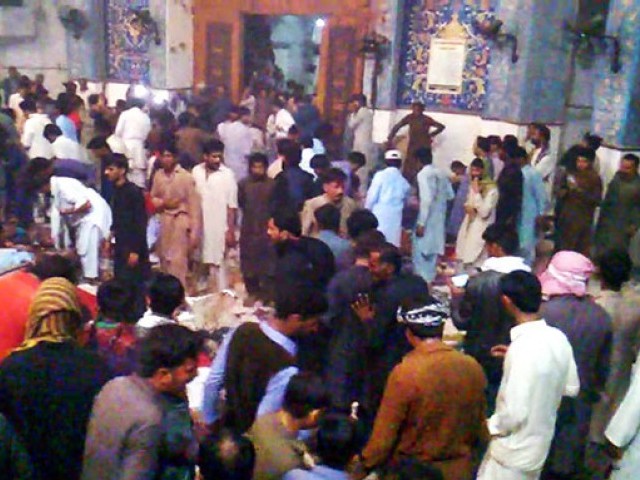 Inside view of Sufi saint Lal Shahbaz Qalandar’s shrine in Sehwan, Sindh where a suicide bomber blew himself up on Thursday, February 16, 2017. PHOTO: ONLINE

HYDERABAD / KARACHI: At least 72 people have been killed and over 200 injured in a suicide bombing at the shrine of Sufi saint Lal Shahbaz Qalandar in Sindh’s Sehwan town on Thursday, officials confirmed.

Police confirmed it was a suicide attack. IG AD Khawaja revised an earlier death toll, saying that at least 72 people (43 men, 20 children and nine women) have been killed and many more injured.

The bomber struck inside the compound, where a large number of devotees were performing dhamal, devotional dance, sources said.

According to a police source, the bomber entered the shrine and blew himself up amid a large assembly of devotees, many of whom were there because Thursday is considered a sacred day to pray at the shrine. 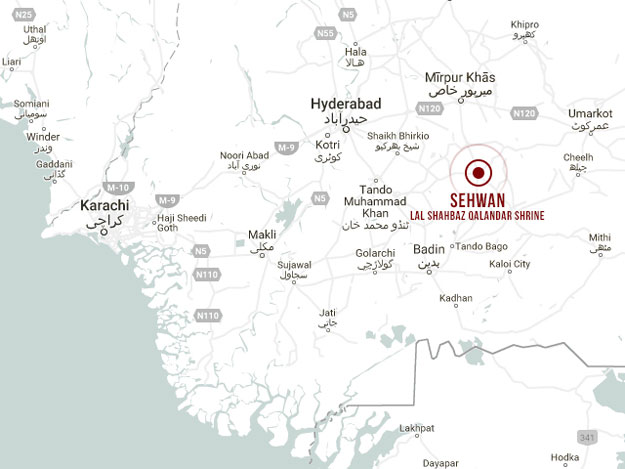 The bombing is reminiscent of a near-identical attack at Dargah Shah Noorani, in Khuzdar district of Balochistan, late last year. At least 45 people, including women and children, were killed in that attack.

An emergency has been declared in hospitals across Dadu, Sehwan and Hyderabad.

“Ambulances from Hyderabad and Jamshoro have been sent to Sehwan. The town has a taluka hospital but it is not equipped with a trauma centre to deal with emergency cases,” in-charge Edhi Foundation Mairaj Ahmed told The Express Tribune.

Navy helicopters, PAF aircraft are being dispatched for rescue operations, according to the ISPR.

#Sehwan. Air Chief directs to utilise C 130 till complete evac. Injured will be treated at PAF hosps too. Ts will not be spared.

Eyewitnesses described gory scenes in the shrine’s compound where human body parts were seen scattered. Some bodies were also seen lying on the floor.

‘Terrorist acts being executed from Afghanistan’

Meanwhile, the ISPR said the terrorist acts were being executed from sanctuaries based in Afghanistan.

“Recent terrorist acts are being executed on the directions from hostile powers and from sanctuaries in Afghanistan. We shall defend and respond,” DG ISPR Major General Asif Ghafoor said in a statement.

Recent Ts acts are being exec on directions from hostile powers and from sanctuaries in Afghanistan. We shall defend and respond.

“Each drop of nation’s blood shall be avenged immediately.
No more restraint for anyone,” the army chief was quoted as saying.

#COAS, "Each drop of nation's blood shall be revenged, and revenged immediately. No more restraint for anyone."

Lahore, Quetta — the bombers are back

Local authorities have appealed the people for blood donation. Many of the injured were shifted to the hospital in rickshaws, on foot and on carts before the ambulances arrived.

Pakistan Peoples Party (PPP) co-chairman Asif Ali Zardari has left for Karachi from Dubai, sources told The Express Tribune. The former president will also pay a visit to the shrine.

The country has seen an upsurge in terrorist violence over the past few days, with bombers striking in Lahore, Peshawar, Mohmand Agency, and now in Sindh. Seven people were killed in two suicide attacks in Mohmand, while a bomber targeted a van carrying lower court judges in Peshawar.

Security forces have shut down the Torkham border between Pakistan and Afghanistan.

“Pakistan-Afghanistan border closed with immediate effect till further orders due to security reasons,” the ISPR said.

Pakistan-Afghanistan Border closed with immediate effects till further orders due to security reasons.

The attack on the shrines of Lal Shahbaz Qalandar represents an attack on the progressive, inclusive future of Pakistan: PM Nawaz Sharif

We must stand united in this struggle for the Paki identity, and universal humanity.We have faced tougher circumstances,nd still persevered.

Strongly condemn the blast at Sehwan. My heartfelt thoughts and prayers for the families of the victims. Praying for the recovery of injured

Strongly condemn at bomb blast incident in #SehwanSharif and prayed for martyrs and injured people. May Allah protect Pakistan

Deeply sad at the attack on Shrine of Saint Lal Shehbaz Qalandar.The brutal series of attacks by our enemies targeting innocents is barbaric

DAG to argue why Axact boss was wrongfully acquitted, should be retried