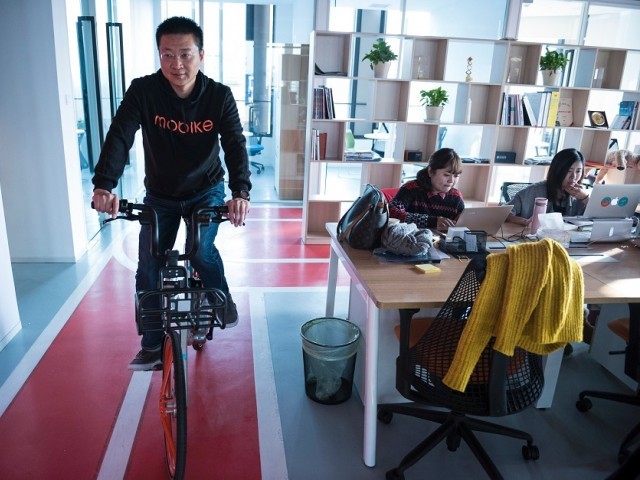 Davis Wang, CEO of Mobike riding a bicycle in the headquarters of Mobike in Shanghai. PHOTO: AFP

SHANGHAI: Unlock them with an app, drop them off anywhere, and nip past lanes of stationary car traffic: the humble bicycle is seeing a revival in China as a new generation of start-ups help tackle urban congestion and pollution with fleets of brightly coloured two wheelers.

The bike-share concept has attracted huge venture capital as fledgling firms wrestle for market share. Such has been the success of this made-in-China business model, which is using smart phones to reignite the nation’s passion for cycling, companies are hatching plans to export the idea worldwide.

“We are focused on how to make the small bicycle have a big impact,” said Davis Wang, CEO of Mobike, which launched last April in Shanghai and already has several hundred thousand of its silver-and-orange “smart” bikes in 13 Chinese cities.

Key rivals Mobike, Ofo and others are tapping into the sharing economy ethic behind Airbnb and ride-hailing apps such as Uber, and targeting China’s 700 million mobile phone users, who increasingly use their smartphone for transactions.

Customers use the firm’s app to release a bike’s lock for rides costing as little as 1 yuan (15 cents) an hour. Bikes can be left anywhere for the next user. 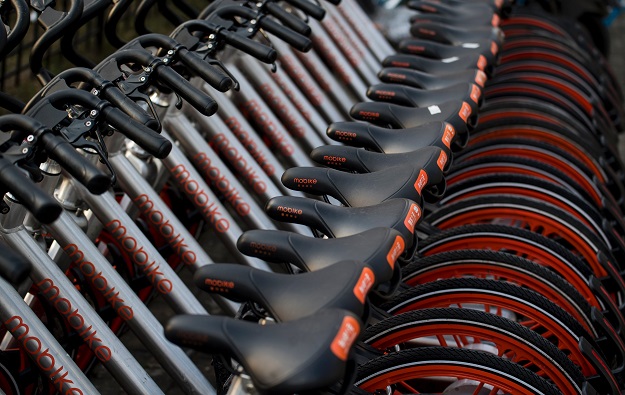 Mobike’s app also shows where idle bikes are, while both companies capture rider data they say can help in traffic planning.

“If we can persuade hundreds of thousands of people in every city to start to re-use bikes every day, then we can create a social impact for every city,” Wang told AFP.

Cities gridlocked by traffic and deteriorating air quality have prompted both government and consumers to search for greener solutions.

Industry evangelists say the new approach to bike sharing can help change that by solving the “first-mile/last-mile” problem that has long plagued urban planners: how to move commuters between their homes and public transit. 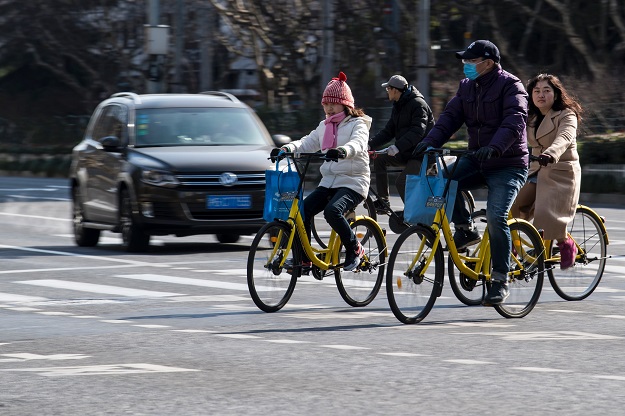 The inconvenience of travelling to a bus stop or metro station can be enough of a psychological barrier to push commuters toward taxis or car ownership.

“In places where the subway does not extend, where it’s difficult to change from one kind of transport to another, it’s so easy to get where you want to go with Mobike,” said Hu Hong, 29, who pedals to her Shanghai real-estate job.

Some Chinese cities started municipal bike-rental schemes years ago that allow users to pick up and drop off their wheels at designated stations, similar to hundreds of programmes around the world.

Today’s start-ups have removed that shackle, and the convenience of being able to drop off anywhere means a new generation of riders are now ubiquitous in cities such as Shanghai and Beijing.

Ofo, which launched in 2015 as a Peking University student project, claims 10 million users for its one million bright-yellow bikes in 33 cities. It plans to add 10-15 million bikes this year, chief operating officer Zhang Yanqi told AFP

Mobike shares a time-lapse graphic that, using its GPS system, tracks customer rides over a recent day in Shanghai. 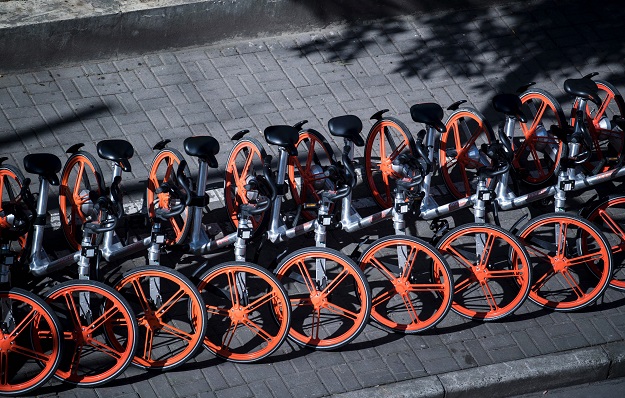 Eager to cash in, Chinese and foreign investors have handed Mobike and Ofo hundreds of millions of dollars.

The ramp-up recalls the battle between China ride-hailing leader Didi Chuxing and Uber, into which both poured billions of dollars before joining forces last year with Didi in command.

Didi is among Ofo’s biggest investors, while Mobike CEO Wang is a former Uber exec.

Jeffrey Towson, a professor of investing at Peking University, said “economic reality is being suspended” as rivals burn cash to grab turf.

“I think they’re going to pull it off. A lot of businesses start this way: you have lightning in a bottle, a hot app, and you build a more sustainable business as you go,” he explained.

Two-wheel drive: China tech giants bet on ‘Uber for bikes’ in hunt for next unicorn

Weaker entrants will drop out or be absorbed, Towson added.

China’s government singled out Mobike and Ofo last month — praising bike-sharing as a means of cutting emissions and traffic.

Ofo launched in Singapore in recent weeks, and is now eyeing US and European markets. Mobike plans to enter Singapore within weeks.

Lower winter ridership and losses from damage and theft also will weigh on bottom lines, they add, but insist the future appears bright.

Both Mobike and Ofo loftily envision tens of millions of connected bikes worldwide.

“It has only just begun,” said Ofo’s Zhang.

“We hope to fulfil this vision in the next two to three years.”