Kevin Pieter­sen return­ed to the Englan­d side in prime form as he led his team to an emphat­ic seven-wicket win over Sri...
Published: May 14, 2010
Tweet Email 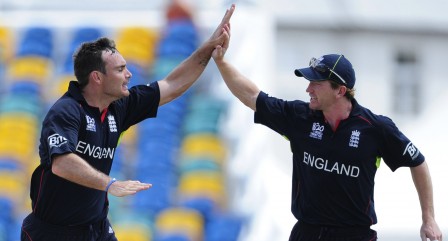 KARACHI: Kevin Pietersen returned to the England side in prime form as he led his team to an emphatic seven-wicket win over Sri Lanka on Thursday in the first semi-final of the 2010 World Twenty20.

Pietersen, who missed his side’s last match as he flew back to England to attend the birth of his first child, smashed 42 off only 26 balls as Sri Lanka were routed in 16 overs. Hitting three fours and two sixes on a pitch difficult for batting, Pietersen followed Craig Kieswetter’s aggressive start at the top of the order to allow England to ease past Sri Lanka’s 128 for six. An opening stand of 68 between Kieswetter (39) and Michael Lumb (33) ensured England did not repeat Sri Lanka’s atrocious start – slumping to 47 for four – after they had opted to bat first.

Angelo Mathews saved Sri Lanka’s blushes via a sedate half-century that allowed last year’s finalists to go past the 100-mark. All the England bowlers bar Tim Bresnan went for or under six runs an over as the Sri Lankan batsmen had no answer to the clever change of pace on a deteriorating and slow pitch. Sanatha Jayasuriya and the tournament’s highest-scorer Mahela Jayawardene failed yet again at the top of the order and, as a result, the poor start led to a below-par total which proved to be too small for the in-form England.

England will play their first World Twenty20 final on Sunday against winners of the second semi-final that takes place today between Australia and defending champions Pakistan.